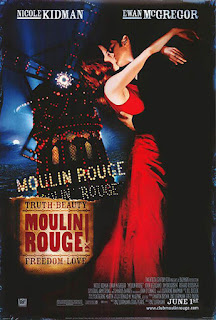 The first scene I chose to reflect on is the very scene that gave me the idea. It's kind of random, as I actually haven't watched this film in a while, but I was listening to the soundtrack and remembered just how amazing this particular scene was. It's "El Tango de Roxanne" from Moulin Rouge.

Just a little background on the film... Moulin Rouge is a film by Baz Lurman that was released in 2001. It's a bohemian musical that uses pieces of pop/rock songs from all over the musical map and timeline. From Elton John's "Your Song" to Nirvana's "Smells Like Teen Spirit" it's easily the most eclectic musical of all time.

The film is very odd. I will admit the first time I watched it, I contemplated stopping within the first 10-15 mins because it starts out VERY weird. I am so glad I didn't! This movie was absolutely stunning on more levels than one. Even though it was weird, it had a story, and unbelievably tragic love story filled with some of the best production design I've ever seen. So about 15 minutes in, when Ewan McGregor begins to sing "Your Song" I totally dropped my remote and couldn't get enough of his lovely voice. The rest of it was fantastic, with the exception of the "Like a Virgin" scene which had me on the ground crying with laughter because it was so dumb.

But THE scene that nearly stopped my heart was "El Tango de Roxanne." The Argentinean performer leads a chorus of vocalists to sing a tango version of Sting and the Police's "Roxanne". It sounds impossible, but it was fantastic. At that point in the story, Christian (Ewan McGregor) has fallen madly in love with a courtesan (Nicole Kidman) named Satine and she with him. However, he isn't the only one who wants her. A wealthy duke who holds the money and power of running the Moulin Rouge and control over it's theatrical pieces lusts for her. He is a foul piece of work, but they know they need him to fund their work. She decides to seduce him one night to ensure that nothing happens to the work of the others in the Moulin Rouge by securing the Duke's attention and affection.

Obviously this does not settle well with Christian, nor does it with her, but they accept it as the last resort. "El Tango de Roxanne" takes place during the night of the seduction. It is intercuts between Satine's dinner with the duke, and Christian waiting patiently with the Moulin Rouge dancers and performers. The tension is mounting as Christian begins to realize his jealousy over Satine, and rightful jealousy too, as they love each other and she is forced to give herself to another.

The Argentinean performer, begins to illustrate to Christian how falling for a courtesan can only end badly. He does so by singing the tango song, which calls all the performers to dance a sensual tango illustrating the passion and desire of the situation. The famous line the Argentinean screams is "Jealousy will drive you... MAD!!!" and he's right.

I have always loved the tango. It's stunningly beautiful and full of passion. It's definitely not a dance for the casual couple. The scene begins with the tango, but done in a raw and sexual way, using it to demonstrate the power of lust and desire, and possession. These are the emotions the duke has for Satine. As the tango goes on with "Roxanne" as it's melody, Christian sings his own part, demonstrating a jealousy that isn't rooted in sex and lust, but in passion and the deepest of true love; what I would call a righteous jealousy. The contrast between Christian's angelic, almost wailing part against the Argentinean's rough and dirty vocals sets the stage perfectly for the difference between the two men and their feelings with Satine. 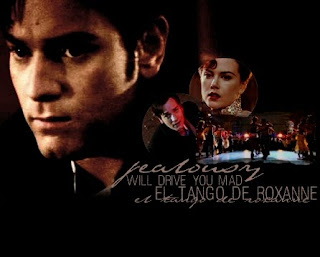 This goes even further as the intercuts of Satine and the Duke continue. The room they are in is very, very dark lit only by a couple of candles. Satine and the duke are both wearing black and dark colors. The lighting makes their skin look very pale and even corpselike, almost like the moon in the night sky. You get a very cold feeling from both the production design, and the acting. Christian however is very warmly lit, although also wearing black. His skin tone stays natural and warm. It's a very subtle tool to show you the difference between the two men and the affect they have on her.

Satine sees Christian outside the window about 2/3 of the way through the scene. Upon looking at him, she realizes that she can't pretend anymore and that she must stay true to Christian even if it means risking the material comforts and the ambitions of stardom, which were all she cared about when you first meet her in the film. This sets the duke off immediately, and the scene reaches an amazing climax. The duke in his anger attacks Satine, in the process of raping her as the song reaches an epic choral mix of all the singers and dancers. The emotion at this part just overflows, I thought it would come right off the screen itself! In essence it did, I was clinging to my bed-sheets if I remember correctly haha.

This scene is one of the best demonstrations of the power of jealousy I have ever seen, particularly male jealousy which is in my opinion way more consuming and ravenous than female jealousy. The director picked the perfect elements to construct it. He used the method of combining the gritty and the angelic, the pure and the lustful, and using arguably the most passionate dance around as a metaphor for the depths of these feelings and the root of jealousy and possession.

Moulin Rouge is definitely not for everyone, especially those who don't like musicals, but I would recommend it as a visual feast and a beautifully sad story for those it appeals to.
Posted by Alexis P. Johnson at 2:48 PM