They say you're a man with true grit... 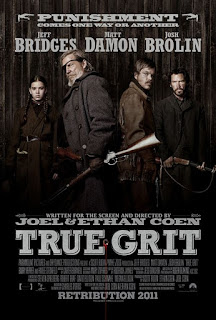 Okay it’s been shamefully long since my last post but I promise that won’t happen again. This past semester was killer and now it’s over, praise the Lord! So now I can blog again and I begin my comeback with analyzing one of the best films of 2010, from those fabulous Coen Brothers, True Grit.
Their version of True Grit is not a remake of the old John Wayne film, but rather a book to movie adaptation of the novel. The film is fabulous in so many ways. The script is remarkably well-written with quick, sharp dialogue and intelligent humor. You have to really listen and engage. The editing is flawless, the cinematography simple and elegant and the acting… wow… there’s barely a word to describe it. 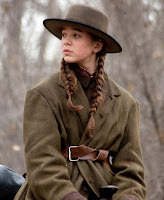 What I am going to be analyzing in this blog is a deeper layer of the film and its story. The character dynamic, for me, was one of the most interesting things about the film. Rooster (Jeff Bridges), Mattie Ross (Hailee Steinfeld), and Labeouf (Matt Damon) all had great on-screen chemistry. Not only did they all do some of the best and most convincing acting of their careers, Hailee Steinfeld is a complete newcomer and she has blown the world away. She’s only 13 and she’s phenomenal!
My favorite was the particular dynamic between Mattie and Labeouf. Many other people who have analyzed the film and novel share with me the fact that there is an underlying romance between the two characters. Though she’s only 14, and he has to be almost 20 years older than her, in his mid 30s, that was not uncommon back in those days. (In Jane Austen’s Emma, Mr. Knightley is 16 years older than Emma, and it works splendidly). So while today it wouldn’t fly, and even then they’d have to wait for her to be “out” in society as a young woman or her coming of age, it’s really not that unusual of a concept. 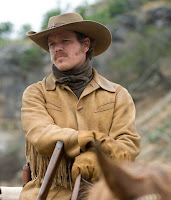 This whole thing is displayed very subtly by the Coen brother’s direction, but the actor’s took that subtlety and made it powerful. It happens the instant you see Labeouf for the first time. He sits on the porch of the boarding house Mattie Ross is staying at while she gets things sorted with her father’s death. He sees her coming and puts his boots up on the porch rail, almost to show how “bad ass” he is, spurs and all. He says nothing, but he doesn’t need to, his costume is quite flamboyant enough to speak for itself. He’s a Texas Ranger and he’s letting the world know it with his dress. She looks at him quizzically, he lights his pipe and the match lights his face in the dark. Absolute cinematic perfection in character introduction, damn good writing. Already we know what kind of man he is: kind of a show off, but distinguished and even an air of class underneath the rough-neck.
The next morning after she sees him, they talk in her bedroom. He even shows her his ranger star in a rather masculine, showy kind of way. She is after Chaney (the man who killed her father played by Josh Brolin) and Labeouf happens to also be after him for different reasons. They have a conversation about it and begin to banter with creative insults due to a disagreement in how the situation should be handled. The chemistry is spot on. She really hits his nerve and he says something to the effect of “I thought of stealing a kiss from you, even though you’re young, and unattractive to boot.” He then goes on to tell her that since she’s a smart-mouthed kid she should get a spanking instead, she then replies that one is as bad as the other. Good one Mattie! haha it was great stuff. 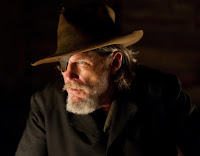 (At one point he does end up spanking her or whoopin' her good, with both his gloved hand and a reed from the river, because she 'disrespected' him and Rooster. This is rather early on in the story, and though it wouldn’t have even been given a thought back in the old west, it may raise a few eyebrows nowadays haha.)


Anyway, the story goes on as Rooster, Labeouf and Mattie go searching for Chaney. The scenes involving these three are so wonderful, I loved every minute.


Mattie is convinced Rooster is the right man for this job because he’s the meanest, toughest Marshall around. The two of them form a friendly bond and share a likeness in many viewpoints and sense of humor. But Rooster has many down sides, chiefly that he’s often cold, indifferent about law and order, and also he drinks… A LOT. 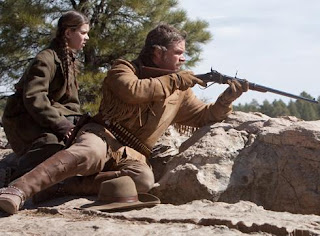 Labeouf annoyed Mattie at first, and of course she resents him for the spanking incident, but as the story progresses, she sees how much of a man of honor he is and that though he looks like a rodeo clown, he really is a hero. He gives off the knight-in-shining-armor vibe, just in a crude cowboy sort of way. Labeouf’s morality is closer to her own, and she sees how she misjudged him. One of my favorite scenes is when Mattie tells LaBoeuf, with a gleaming, school-girl look in her eyes, that she chose the wrong man to go after her father's killer. He looks back with an undefined understanding and extends his hand for her to shake. This gesture really shows that he no longer considers her to be a girl, but an equal. He even tells her that he misjudged her too and that she’s “earned her spurs” but he stops himself before saying even more, even though his countenance may hint at a deeper longing. They both show an eagerness to either impress or be concerned for each other throughout the film. She especially shows a very admiring concern for him in many scenes. He saves her life again before the end, however she gets bitten by a snake and they have to part ways before they can really even say goodbye. She even expresses to Rooster that she doesn’t want to leave Labeouf alone, but she desperately needs medical attention.


The end of the film is rather sad, but very realistic. Mattie never got married, she lost her arm due to the snake bite, and she has lived a very straight and narrow life. She only heard from Rooster a few times after that, but she never saw Labeouf again. It makes sense, but just because it works doesn’t mean it’s any less depressing haha.
Though it’s never blatantly said in the film, you can definitely feel through amazing acting performances and brilliant writing that there was a deeper connection between those two characters. I love when I can watch a film or read a book and come away with thoughts and musings about things like this. Though words are never spoken, I think Mattie Ross was in love with that lone Texas ranger Labeouf, and for wonderfully valid reasons. Maybe that’s why she never married, because no one else measured up, or because she didn’t want anyone else. We’ll never know, but it’s always fun to speculate. ;-) 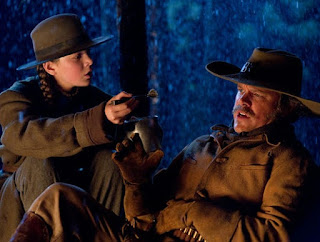