I wanted to do a blog about best on-screen kisses, but truth is there’s far too many of them and they are far too wonderful for far too many reasons. So I decided to create a sort of sub-series within my blog and every once in a while I will add to the series as I see fit. So you can expect many more dedications to best on-screen kisses. This subject, for me, is not merely limited to feature films but television shows, animated films, and mini-series too. So, in light of that, my first entry is from a mini-series, one of the best EVER. 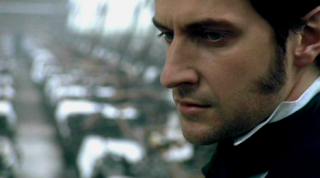 Let me give a little background first. This mini-series is one of my all-time favorites and it contains within it my greatest literary crush, John Thornton. He’s wonderful on paper, but cast him in the shape of Richard Armitage and there’s no way anyone could resist swooning. I could go on and on about why his character is so wonderful, but that would take all day, and one way I can do it is through describing the way he kisses Margaret Hale in the end of the story.


Not unlike Jane Austen’s Pride and Prejudice this story deals with a very strong-willed woman who perhaps acts without thinking and on prejudice and has to learn a lesson in that. Thornton is a man who seems cold, but is capable of the most fervent passion. He loves her immediately, but she takes a very long time to see him for who he truly is and not the ruthless person she’s painted him in her mind.


It seems as if she’s realized this all too late. She steps off the train on her way back to London to get some air, and spies Thornton on the next train over. You can just see the luminescence of inner joy draw over her face like the opening of a drapery. He looks up and sees her too, and the same thing happens to his face. It’s a perfect portrayal of equal feeling. They both look beautiful even though they are clad in black, white and gray colors, they glow with expression.

For reasons I can’t explain without giving a plot summary, he hands her a yellow flower and then this amazing music pours into the scene a mix of plucking harp and strings. It’s so subtle, and yet it binds the entire last moments of the piece with a crucial artistry. 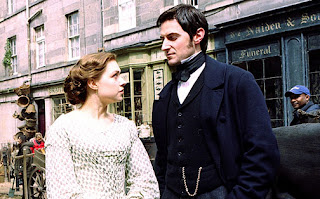 There is dialogue relating to the plot, mostly Margaret stammering over words because of the shame she feels for having judged him so harshly throughout the story. The beauty is Thornton sees this and he watches her talk with very careful eyes. He doesn’t care about her words because he knows what she’s really feeling now and it’s what he’s been waiting for all the time. He takes her hand in the middle of her babbling about business and this makes her realizes she doesn’t have to be ashamed any more. Without hesitation, she takes his hand and kisses it, a beautiful gesture only great cinematography could capture so flawlessly.
This is where the unbelievably gorgeous part comes in... While her lips are still pressed to his hand, he takes his other hand and gently puts it to her face, titling it upward to meet his own. He leans in slowly to kiss her, shallowly at first, then holds her face with both hands and then it’s fully mutual and incredible, right to the slow opening of both their eyes as the conductor calls for the train’s departure.

Like many things in the art, you have to see it, it’s a visual thing. The entire mini-series is phenomenal though and the tension between the two characters has so much build it practically tears your heart out, especially in the famous “Look back, look back at me…” moment. Anyway, I hope all you hopeless romantics out there will give it a shot and judge for yourself. If you know the value of a kiss, you won’t be disappointed. 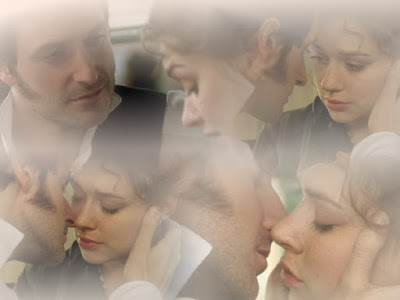