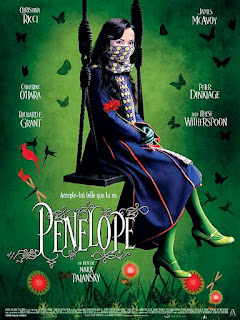 
Best On-screen Kisses #2: Penelope and Johnny (Max) from Penelope.
Penelope is a very underrated film. Is it the greatest thing ever? By no means, but for what it’s supposed to be, a contemporary fairy tale, it’s perfect. The story is simple, cute, even cliché, but rich with new approaches and whimsical production design. The costumes are colorful, vibrant and combine several eras of style and design. The sets are imaginary and completely unique amongst any in their type also blending Grimm Brothers décor in a modern setting. As an artist who is fond of combining time periods and different genres in the same movie, Penelope really hits home for me.


For background, Penelope is a blue-blooded girl whose family has been long accursed that the next daughter in their line would be born with the face of a pig. Unfortunately, this fell upon her. The only way to break the curse is to find another blue-blood (aka: rich, upper-class person) to accept her and love her in spite of her looks. It’s a classic Beauty and the Beast reversal. 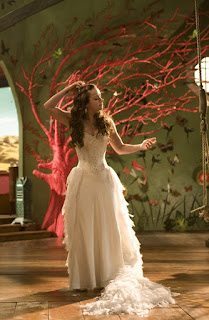 Penelope is played by the actress who never seems to age, the gorgeous and eccentric Christina Ricci. Though she is nearly 30 at the time of this film’s production, she inhabits the looks and behaviors of a much younger girl flawlessly. Her adorable performance is guaranteed to enchant anyone who watches.


Penelope becomes entangled with Max played by the ridiculously talented James McAvoy. Once again, McAvoy superbly hides his thick, Scottish accent in an American guise. Max is really down-and-out gambler named Johnny, but in an effort to earn money he goes undercover as a blue-blood in an effort to get a picture of Penelope and a fat wad of cash. Of course, he soon realizes his wrong doing in this, and after hurting her (and himself) greatly, he has to clean up and redeem himself. 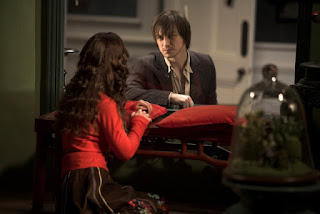 I’ll skip all the stuff that happens in between their separation and reunion, because hopefully you’ll have seen the film yourself, if you haven’t, beware of spoilers. In the end Penelope breaks the curse herself and Johnny gives up his life of gambling, but also loses all hope of ever getting to be with her. When she finds out the honorable things he’s done to fix the mess, she goes looking for him. It’s Halloween and she’s dressed as, well, herself complete with a pig-face mask. She thinks she’s in disguise but it’s pretty obvious he knows it’s her from the moment she stops by. Once she gives herself away completely, he rushes to her impulsively and kisses her.


Now maybe it’s just the gorgeous song “Hoppipolla” by Wenzel Templeton & Robert Pegg that plays when this happens right through to the end of the film, but it’s more than that. It’s the way he runs and grabs her without hesitation or forethought. I know this sounds silly, but more than one female peer of mine has said after watching this film that they would love to be kissed like that. For a man to drop all his guard and inhibition and say everything while saying nothing. You can almost feel the fireworks going on inside the characters when you watch this happen, as if their passion could be rippled across as lake to the audience, and that, for me, is the sign of a perfect kiss. 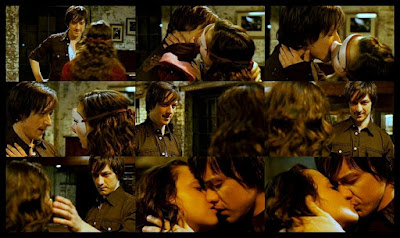