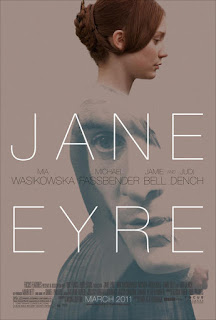 British stories and literature are one of the few things I find that I can like several film adaptations of. I have two versions of Jane Austen’s Emma and Pride and Prejudice and I love both the versions of these for different reasons. This is the third version of Jane Eyre I’ve seen. The first was a BBC mini-series that was horrendous, and the second was the 1996 film with William Hurt and Charlotte Gainsbourg. I absolutely loved that version, but I think the latest adaption released this year at the hand of director Cary Fukunaga tells the story in the most original and hauntingly beautiful way yet.


The first thing I want to mention is the title role of Jane Eyre. I was absolutely blown away by Mia Wasikowska. Though I’ve liked her since her birth into the film world, she didn’t really show what she was fully capable of until this role. She was meant to be Jane Eyre. She also nailed the Northern English accent, which only added to the endearment of her portrayal. 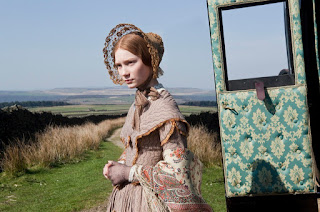 Now perhaps it’s just the fact that I am a woman, or my own experiences in matters of the heart, or just the emotional state I was in when I watched this, but Mia’s performance hit every note and key of my heart. She was electrifying, utterly believable, and completely convincing. Until this performance I had never fully grasped what the conditions and circumstances penned by Charlotte Bronte actually did the character, and that’s what Mia brought to it. Every time Rochester ignored her, or flirted with stupid, silly other women, or any time he would do something dangerously romantic she showed it in her voice and throughout her entire body from her eyes to her hands. It almost took my breath away to watch her in certain scenes because I was like, “Dear God, I know exactly what she’s feeling.” And it was almost awful to relive, but that, my friends, is the power of good acting. I know next Oscar season is miles away, but if people have any sense they won’t forget her then. 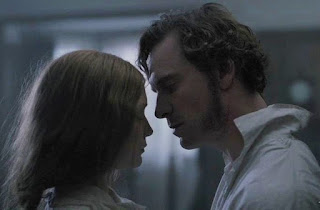 There was a subtle, yet excruciatingly potent sensuality in the film. You have a man in his “prime” and a young lady just into full womanhood. The difference brings a set of hormonal and emotional strain that is absolutely bewitching. It wasn’t immodest or improper in actuality, but it definitely flirted with the line drawn between those things. Films like this have a much “hotter” sense of passion than films filled with erotic sex scenes. Less is more, and usually far more poignant. The scene after Jane saves Rochester from the fire in his bedroom was a part that stands out in particular. He leaves to go deal with the “fire-starter,” telling Jane to stay in his room. He has given her his coat, and when he returns she is curled up in it and drawing it to her nose taking in the scent. Then he thanks her and takes her hand and they get so close it’s practically exploding with tension. She tells him she’s going back to her room because she’s cold, but when she gets there she sighs and begins to untie her nightgown as if she’s hot, well the audience was too! *laughs* 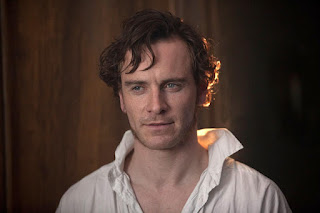 Michael Fassbender is a suave, and sharp version of Rochester. Although Rochester is pretty much kind of a jerk since he was written, he isn’t quite so unsympathetic as this version portrayed. My one complaint was that this film needed to develop him and all his mysteries more. Jane is so unbelievably well-developed and you really feel her plight, but for those who watch this film not already knowing the story, he comes off a bit different due to a lack in background and expansion of character.


My favorite scene in any version of this story is Jane and Rochester’s “fireside talk” where they banter back and forth in wit and Spartan-like honesty. The dialogue is superb. These are two people who are simple and plain in looks but completely leveled in mind and spirit. Their differences and headstrong attitudes begin to fence in an elegant duel that has no winner, for both are equal. That is why Rochester loves Jane and in declaring his love for her calls her his equal. Even though Rochester has his issues, this part of their love story is enthralling to me. True love and romance is nothing if not two people, equal and alike in mind and spirit, finding their mate. So in this way, I find Charlotte Bronte a genius. She scripted a cranky and selfish rich man with a plain, young governess. The concept would seem boring on the surface, but she made their romance sensational with the power of mind and heart. Brilliance. 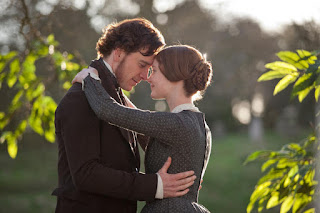 Roger Ebert said in his review of the film: "...voluptuous visuals and ambitious art direction,” and he’s right. I have watched more period pieces than I can count, and this one had a special presence I’ve never experienced before. Part of what made this version so spectacular is the production design. Mr. Rochester’s main “sitting room” with the long dining table, decorative piano, and chairs was stunning. The whole time I coveted everything and kept whispering “I want that! I want that!” The costumes kept to their simple, gothic roots but added an extra flair that made them stand out and be noticed. Even Jane’s wedding dress, which you would think is a bright and happy thing, felt cold and foreboding thanks to the design setting the perfect mood. To marry the production design perfectly, they had outstanding cinematography which bound the story and each intense scene in tight threads of art. Throw a dark and brooding score of woeful strings on top of all of this and you have one delicious film. 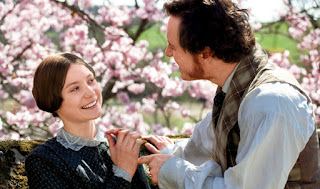 There wasn’t one facet that wasn’t wholly drenched in talent. Editing is such an art, but a lot of times it’s rare to see distinct styles of editing in this genre. I was so happy to find that both the script writer and the editor helped make this version unique and unforgettable by starting the story backward and telling 80% of it in flashback. The film is more than just another remake, it has strong legs to stand on its own. I am hoping to add both the Jane Eyre films I love to my collection of British double-takes in the not-too-distant future.
Posted by Alexis P. Johnson at 9:03 AM