The Philosophies of Tron 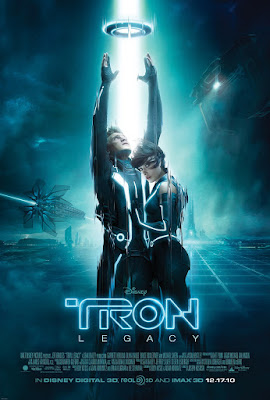 "You can’t steal something that was designed to be free!"
~ Sam Flynn

One of my favorite films of last year was Tron: Legacy. Before I saw it, I had no idea I would love it so much, and on additional viewings I was able to dig out little pieces of gold embedded in the story. Not only was this film one of the greatest pieces of visual art I have ever seen, but in its simple story it is filled with thought-provoking subtext. There is a lot of philosophy and direct Biblical imagery throughout the entire film. This is a different sort of entry for me, but I plan on doing more like it in the future. If you haven’t seen the movie, you probably won’t get this post as it’s a commentary and not a review.
In the beginning of the film, the CEO and leaders of Encom are having a meeting in which the secure and powerful software developed by Sam’s father is going to be available to all. Unfortunately, the CEOs and leaders have put a price on the software, and what was meant to be a free gift from Sam’s father is now a packaged and priced consumer good. These men remind me of the Pharisees and Sadducees of old, overly religious men who put limitations on the power and grace of God by placing their own religious ritual above it. It’s also reminiscent of Catholics before Luther’s day who would charge people to see “holy relics” or charge them to spring a loved one’s soul from purgatory. These are things you cannot put a price on, to do so is corruption. By making the software come at a price, these men have hijacked something secure and protective meant to be available to all who sought it. 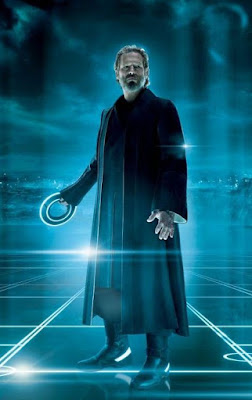 When Sam comes into the meeting, he spoils their plan momentarily by making the software available online. Thousands download it in just a matter of minutes, but the men stop it before further “damage” can be done. This reminds me of the turning of the tables of the tax collectors; Sam has taken their unjust plan and flipped it on its head. The one man among them who is righteous and keeps the ways of Kevin Flynn within the company is Allan. He challenges the rest of the group and they despise him for it. Allan reminds me a lot of Samuel or any of the prophets from the Old Testament really, who keep the righteous ways amidst all the corruption. In Samuel’s day Saul was king and Saul’s men wanted to get rid of the old prophets in a move to be more progressive, but Samuel stood firm and ultimately David becomes king and Saul is rejected. In some ways that even happens in this film with Sam ultimately coming back and taking the company again in the end.
Kevin Flynn is the creator of the Tron video game and essentially the creator of the world or digital frontier. So the obvious metaphor of the creator’s son going about his father’s work is definitely clear to most people, but I would say that in the sense of salvation the topic is hit mostly with Quorra. 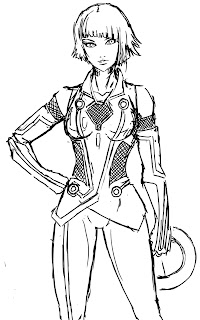 Quorra is an angelic being who just came into existence without the creator expecting it. That’s where deism comes in. In deist belief, God is simply a creator who made the universe then leaves it. Isaac Newton described it as a watchmaker and his watch, God puts the mechanics into place and then lets it do its thing. Deists agree that there is a God as the source of all motion and matter, however his intercession with his creation only happens occasionally, if it does at all. Quorra’s kind, the Isos, are just that. They “surprised” the creator by happening.
This also comes to play in the first Tron (1982) when Kevin Flynn first gets sucked into his digital grid and runs into Tron:
Kevin Flynn: You guys know what it’s like, you just keep doing what it looks like you’re supposed to be doing, no matter how crazy it seems.
Tron: That’s the way it is for Programs, yes.
Kevin Flynn: I hate to disappoint you, pal, but most of the time, that’s the way it is for users too.
Again, this implies that the users don’t have complete control over their creation. Now being that the users are actually humans and not gods it makes perfect sense. But the problem lies in comparing a human like Kevin Flynn to godhood. Many implications there that lead more to a deistic and not Biblical view.
BUT… back to Biblical symbolisms now and back to Quorra too… 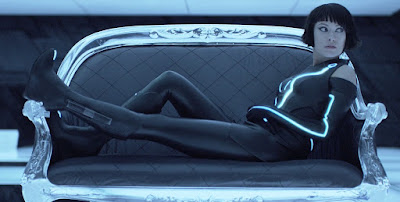 Quorra tells Sam all that Flynn has been teaching her and one particular thing she points out is:
Quorra: Flynn has been teaching me the art of the selfless, about removing oneself from the equation…
Kevin Flynn taught this to Quorra, I believe, because he never truly did it himself. Quorra grew under his teaching and therefore a selfless act for her was both an absolute honor and something one should never hesitate to do. 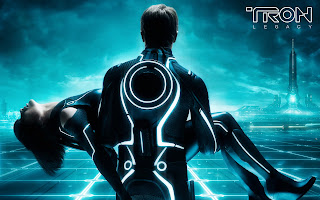 I didn’t notice until the third viewing, but when Flynn asks Sam if he’s got a girlfriend or a wife, he replies “a dog, Marvin” but then he says his dog was a rescue and that’s where Quorra was able to draw the idea from. Later in the film Quorra tells Sam the story of how she was saved by the creator, his father, and she says, “I guess you could say I was a rescue…” The idea of salvation comes through from both the creator Kevin Flynn, and the son of the creator Sam Flynn, which is the most obvious metaphor based on Biblical idea that both creator and his son have the innate ability to save the lost.

In that same conversation, Quorra discusses how the portal, which is the opening between the digital world and our own, was so bright that it became a symbol of hope for the programs and isos. She goes on to describe it as "a sign for something greater" and how she imagines it to be similar to a sunrise. She is aware of her smallness and aware that there is something beyond her, something greater and that great thing is symbolized by light as it is in the Bible. 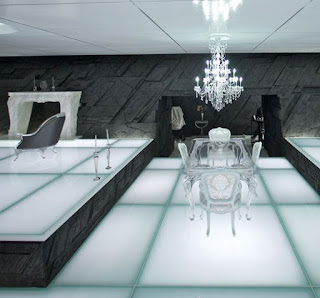 Kevin Flynn also taught Quorra the meaning and tact of patience, even when time is of the essence. She points out to Sam as they pass by a board game in Flynn's off-grid cave that Flynn’s patience usually beats out her aggressive strategy. When Sam becomes frustrated that his father is taking too much time to get moving when the portal has only hours until it closes for good, Quorra pleads for Sam to “consider his father’s wisdom.” That in itself is a Biblical concept. This idea that obedience and patience aren’t wholly our own and that we often have to seek them from a higher power or someone older with more to give.
One last small point is that Clu had many, though not all, properties of an anti-Christ character. He is a betrayer and a deceiver. In the beginning he comes to Sam as “an angel of light” because he is identical to his father and knowing this, Clu momentarily takes advantage of that. Though Clu is not wholly to blame for being the way he is, much of that rests on the shoulders of Kevin Flynn who made him and did not responsibly look after his beloved program. This suggests, as mentioned previously, the idea of a god who does not have control of his creation, a deist or open-theist god who is not all-knowing. 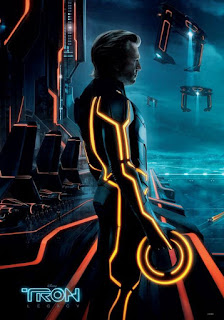 There is so much to go into on these subjects and I only touched on the ones I know the most about. The film also throws in literary symbolisms as well as delving into Buddhism and Asian religions with methods of enlightenment. The point, however, is to get wheels turning and to make known that ALL films are saying something, ssome just say it more deeply than others. So the next time you think you’re watching an “action” or “comedy” and expect to turn your brain off… I suggest you turn your brain on and I think you’ll be shocked at what you’ll find when you are actually looking for it. What messages have you been ignoring simply to be entertained? What statements have you shut your ears to? All art, all films are making them, there's no such thing as a piece of art that doesn't. Even when you paint a bland picture of a red square, there is a reason you chose the square shape and the red color, and that says something. Whether intentional or not, art speaks. So next time you settle in with your popcorn, open your eyes and listen up!
Posted by Alexis P. Johnson at 2:35 PM