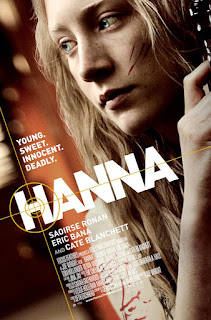 Very few films have the power to surprise and bring the unexpected. There truly is nothing new under the sun, and ultimately Hanna isn’t new, but it’s definitely fresh.
This is the fourth film by Joe Wright who has the masterpiece Pride and Prejudice and the strange but powerful film Atonement under his belt already. He has definite genius potential as he knows how to get great moments from his actors and even greater cinematography from his DP. I remember being left breathless by his majestic shot of Keira Knightley upon the rocks in Derbyshire or the continuous long shot of James McAvoy wandering through war-ravaged France. This guy knows what he’s doing and he knows how to get the most out of his people.

Cinematography is one of the first things I pay attention to in a film being that I am a very visual person, and Hanna does not disappoint. From the moment it opens up, with the snow covered forest of Finland in complete silence, you are immersed. The use of snow and light in the beginning is perfect, because though Hanna is a trained killer and hunter, she is still extremely innocent. The snow symbolizes her purity in that she is smothered by the whiteness and the light amplifies it. Her innocence is crucial in the story because it inevitably fades away. Like his famous long shots like the one mentioned above in Atonement, or the one at the opening of Pride and Prejudice as we travel through the Bennett home, this film did not lack. You get to follow Eric Bana through a subway station fight scene in one continuous shot that will blow your mind with action and artistry. I’m still thinking about that one! 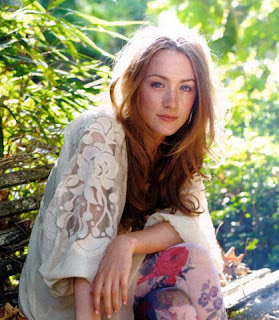 So let’s talk about Hanna… Hanna is the 16 year-old daughter of a rogue C.I.A. agent Erik Heller played by Eric Bana. Since her infancy she has been with him living in a cabin immersed in a life of training and "extreme homeschooling" in which she has never had contact with other people or technology. Hanna knows several languages and has a completely false backstory prepared for when the time comes. Hanna is played by the striking and celestial-looking Saoirse Ronan (pronounced sursh-uh) who not only proves herself a brilliant actress yet again (she was nominated for her role as young Briony Tallis in Atonement) but also as a completely believable martial artist. Seriously, she kicks some major rear in this movie.The incredible aspect about her is that she’s a stone-cold killer who is completely innocent and untouched by the world. I’ve never seen a story tackle such a unique character trait.
The film is absolutely seamless from scene to scene. It was not only superbly edited, but firmly stitched to its sweet, pumping techno score composed by the Chemical Brothers. Between this film and Tron: Legacy, I’m digging the electronic approach to score. It won’t work for every film, but when it works, its gold. I never felt like I was ever taken out of the film by anything, but each moment pushed me forward to the next. 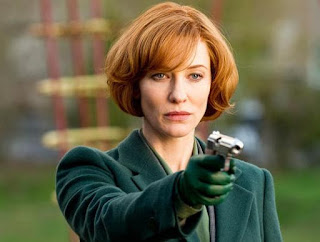 The villain of the piece was excellent. I am referring, of course, to the amazing Cate Blanchett who plays Marissa Wiegler in the film. She is a CIA operative who knew Erik in a past life, so to speak. She has been chasing down Hanna for years for reasons you find out later in the film. The things that gave her a creepy presence, besides her cold and bizarre personality, were her habits. They really knew how to give her distinct characteristics you wouldn’t forget. One of the things she does is brush her teeth in an OCD sort of way. She has a specific rhythm with doing it and one point she brushes so hard her mouth bleeds. Her whole teeth obsession shows the kind of person she is throughout the film and how the frustration with Hanna affects her. She dresses sterile and lives in a sterile environment. Throw in a weird Southern drawl accent and you have yourself a freaky villain! 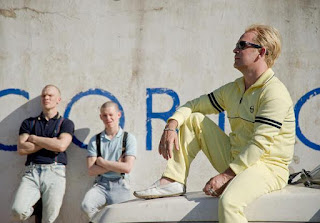 The film also included a great performance from the gorgeous Eric Bana, even though his part was rather short. There’s also hilarious performances from Jason Flemyng and Olivia Williams who play the quirky, new age parents of the girl who ends up becoming Hanna’s first friend, Sophie. And to add to the creep factor, you had Tom Hollander as the German hit man Isaacs who spends a questionable amount of time in European drag bars. He was skin-crawlingly good in the minor role. I don’t know what weirded me out more, his Village People inspired henchmen or his fruity, golf-course fashion sense.
My favorite part of the film, and the part I’d like to focus on the most, is the genius weaving of modern thriller with timeless fairy tales. The climax of the film takes place in Germany which is the birth-land of the famous Grimm Brothers. At the beginning of the film, Hanna reads a book of fairy tales before she sets out on her own. Hanna goes from her life in the forest to a prison in Morocco and finally Europe. Hanna has never heard a bit of music her entire life nor seen electricity, so her reactions to the "magic" of our world is so much like the demure ladies of fairy tales. As you journey with her, you see things through her eyes; everything is strange, new and completely magical even though frightening. She is wholly unspoiled by the things of the world, which is both her endearment and her downfall. 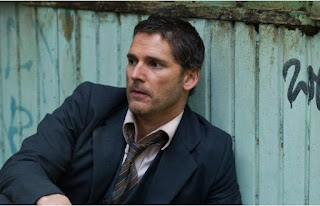 When she finally reaches Germany, the Grimm’s fairy tale takes more of a literal scope. She is set to meet her father in Berlin at “The House of Grimm” which ends up being a run-down amusement park based on their fairy tales. There she meets a man actually called Grimm, a strange, circus-act of a man who is kind and seemingly as innocent as she is. He helps her as she waits for her father and Marissa and Isaacs pursue her. The production design of the amusement park is wonderful; everything feels dead except for Grimm who is full of spirit.
As Marissa gains on her, Hanna must escape the park, but not before she unhappily learns the truth about herself and her father. In that moment, Hanna loses her innocence and Marissa kills Grimm rather violently. The killing of Grimm is such a powerful symbol of the loss of her own childlike wonder, purity, and innocence. Marissa herself is definitely a symbol for the Big Bad Wolf. She even makes a stop at Hanna’s grandmother’s house (the grandmother Hanna’s never met) and kills her in her pursuit for Hanna. One of my absolute favorite moments in the film was when Marissa and Hanna finally have a showdown at the amusement park and Marissa emerges from the mouth of the wolf’s head on one of the rollercoasters. My heart was on a rollercoaster!
The film ends openly. There could be more, which would be awesome as much is left unexplained and unanswered in this film and it has the ability to be a really great series or trilogy. In any case, Hanna is a haunting piece of action thriller that tops most of the genre I’ve seen in a very long time. 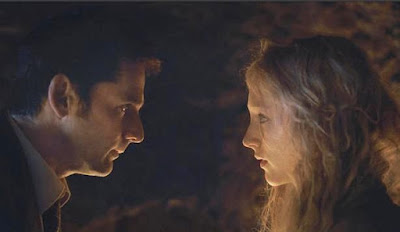