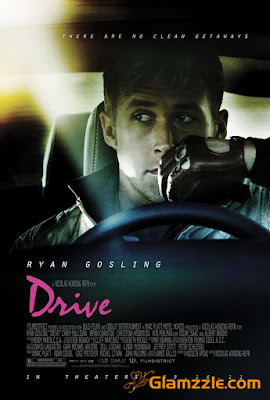 Hey folks, I am back from the dead! Oddly enough the movie business is what has kept me away from writing about movies. For those of you who don’t know, I finished film school. Now, that sounds cool in theory but it has left me with lots of debt. In conclusion, I work at an art-house movie theater now practically 24-hours a day and I haven’t had time to write until now. Yeehaw! But another reason is that I’ve been extremely underwhelmed by a lot of the films I’ve seen in the theaters, even the ones in my own theater which are labeled by pretentious folk as the “good movies.” Everything has been the same thing, one rushed story after another with underdeveloped plot and characters. I was starting to lose hope…
Don’t get me wrong, I’ve seen some great films this summer, and some that I love but don’t exactly want to write in detail about. However, the one that inspired me to squeeze in time to finally get back on the job was Drive, the movie that took me completely by surprise. I think this will not only be a film analysis entry, but also one of my “Best On-screen Kisses” entries at the same time.
I knew next to nothing about Drive going into it, other than it starred Ryan Gosling and he drives cars. Seeing this film was one of my favorite cinema experiences, mainly because I saw it in a great theater with completely crisp and enveloping audio and visual presentation. That’s a bonus for any film, but particularly great in Drive because the film has some of the best visual work I’ve seen in a long time.
From its opening scene to its closing shot Drive captures you with breathtaking cinematography. An eclectic feast of influences contributes to the personality of the film. There are many shots and angles that are drawn from the well of film noir and Alfred Hitchcock. The main character Driver (he is never named throughout the whole film, and honestly you don’t even notice), is often seen in shots where he is in windows and mirrors showing that he has a dual personality. His character teeters on the ledge that separates darkness from light. He has a heart of softness, tenderness, and huge capacity for love and compassion, but when there is danger or threat to the very things he loves or has compassion for he is drawn to a maddening temper only violence can quench. The whole movie darts back and forth between his two sides the same way the shots throughout display him. The sets are a trove of patterns, textures, sharp angles, and shapes that in themselves tell the story even when nothing is being said. The cinematography is sharp, practically flawless, and full of creativity. 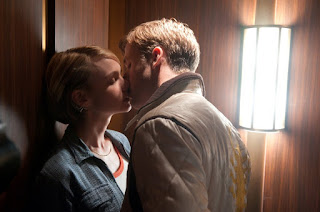 Lighting, it has been said, can make or break a film. This is definitely where the Noir/Hitchcock influence comes to play. Everything I learned in film school, but especially in my Film Noir class, was used by the filmmakers of Drive. They used the depth and shallowness of shadows and light to not only set the mood but to give layers to character in a film that uses less dialogue than most. My favorite use of lighting is during the scene that makes my “Best on Screen Kisses” list. It takes place in an elevator where Driver and the character of Irene (played by the lovely Carey Mulligan) are standing with a man who is a threat to her. In slowed-motion Driver pushes her behind him, gently with great affection in an effort to protect her. The lights dim as he turns around, syncopated with his movement. Then, he kisses her. As they become more intensified with the kiss, the lighting dips from dim to bright until finally they stop kissing and the elevator is brightly illuminated. It’s something that written words won’t do justice, you’d have to see it, but it was so perfect it made my heart pound. 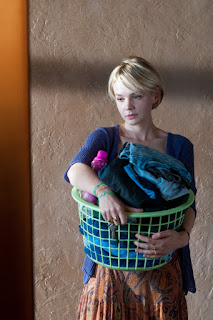 The character, Driver, is intriguing and strangely alluring though you know so little about him. I think that’s half the magic of the film, you can sort of imagine what kind of childhood he must have had, what he must have seen, what he must have been through to get where he is. It’s up to your imagination, and it works in this case. He wears his swanky scorpion jacket and driver’s gloves, and carries no typically swagger but sits, quiet and cool, with a toothpick in his mouth and tempests of thought and emotion going on behind his eyes. His love interest, Irene is equally attractive in the same quiet way. She carries herself with a gentle, feminine spirit. She’s very unlike female characters you see in films today. She is simply kept, sweet, and doesn’t need any sort of attitude or “bitchy strength” to make herself a powerful presence or strength as a female lead. Both actors are rising young stars and if they keep making choices like this, they will definitely get there.
The film’s uniqueness is found in its quiet nature. Most of the scenes are told through visuals with very little dialogue. The film itself has the same personality as its main character, a withdrawn, tender piece of building suspense divided by jolting scenes of extreme violence. You wonder how this character could have such rage beneath him, it’s so out of place, and you never find out why. You know so little about this man, but you feel much for him simply because of great visual storytelling. Though there are some very violent scenes in the film, they are done creatively in very short bursts, just enough to make you squirm in your seat in suspense and surprise. My only qualm was a scene where he walks into a strip club to confront a bad man and there are topless women just sitting in chairs showing off the goods. I found such sexuality completely jarring and out of sync with this film’s overall production and mood. 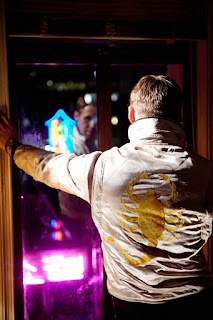 There is a huge use of color and style heavily inspired from films of the 1980s and even a bit of Tarantino flair. The film was shot by DP Newton Thomas Sigel who did something I thought nobody could do, make Los Angeles look shiny and magical. The wide shots of the city sparkle with color and light like an earthly galaxy. All the smog and grit is sort of blown away like dust from a mantelpiece. In many ways this film reminded me a lot of Michael Mann’s Collateral. Not in plot or protagonist, but in style, substance and setting making Los Angeles a sleek and unnerving city, rather than the busy, loud and obnoxious place we know in daily life. The music in Drive is definitely 80s inspired with softly sung electronica and ambient sounds. I absolutely loved the soundtrack and unashamedly made “A Real Hero” by College my ringtone.
Drive is a visual masterpiece and a unique film that incorporates my favorite styles for cinematography, set design, lighting and mood. It’s the equivalent today of what it must have felt to watch a Hitchcock film when it was first released. It’s shocking, provocative, sleek, stylish, and often eerie and unsettling.  In a time where most films released are basically haphazard plots rushed through by sloppy characters, Drive is a modern cinematic wolf in vintage clothing.
Posted by Alexis P. Johnson at 8:49 AM