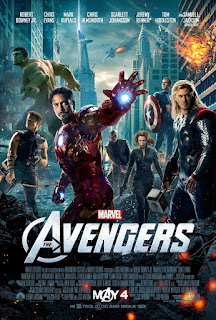 I know I am behind and I was supposed to blog Hunger Games first, but I cannot resist. I must avenge! (Also, like all my blogs, there’s spoilers)

Oh my how can one even begin about Avengers when it has so many things to boast about. Well I begin by saying this, that this movie made its predecessors look like mere trailers. Most of the films leading up to Avengers were good but not great, with the exception of the Iron Man films and those were great for two reasons: one, Jon Favereau is a good director, and two Robert Downey Jr. is a genius, but that goes without saying. Thor and Captain America were both okay films with potential but they were both extremely rushed and could have been so much more awesome than what they were in terms of story and character development. Captain America had what should have been an awesome villain and the cool style of the 1940s war propaganda films, but it lacked severely in story. Though Steve Rogers as a character is adorable, that wasn’t enough to save the movie. Thor had the same problem, the father son aspect and the two brothers relationships were the best thing about the story, and Asgard was breathtaking, but they could have done so much more to develop Thor as a character, they spent a good time on Loki, but I felt Thor had a lot going on that they didn’t delve into and then the movie just kind of ends. I never saw the second Hulk film, but the first one done by Ang Lee was horrifically bad. So needless to say my expectations for this film weren’t all that high. Had there not been this “urgent” rush to get Avengers out, I expect those other films could have been at par as they should have been.

But then, Joss Whedon and co-writer Zak Penn, took hold of the script and directing, and due to Whedon's amazing ability to develop a story and characters in settings where there are many characters (mainly evident in his wonderful Firefly/Serenity series) and fill the pages with quippy and yet relevant dialogue, I should have expected it would be the awesome piece of work it was. I would boldly say that in 2.5 hours Joss Whedon did better character developing for Thor and Captain America than their preceding films did individually. Iron Man and Hulk shined just as well when they reflected off the other characters, and then the ones that weren’t as developed because they didn’t have a play yet, Black Widow, Hawkeye, Nick Fury, were finally fleshed out with motive and point-of-view even though they aren’t super heroes per say. Not only that, but for a film that had so many prequels it was amazing how Whedon was able to bring the new-coming audience up to speed and most of the people who haven’t seen the other films understood everything just fine. 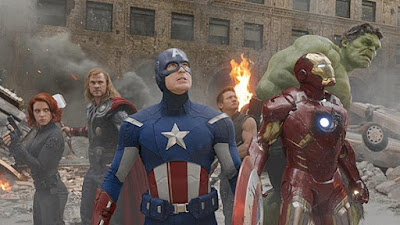 The performances were, as cliché as it is to say, pitch perfect. Each cast member truly became their character and their voices were distinct and unique in every scene, especially the ones where they clashed. To watch such an array of outstanding personalities was like lying back in the grass watching fireworks, you just can’t keep your eyes away wondering which color is going to come up next. I am a little biased as Robert Downey Jr. is a favorite actor of mine (if you ever get the privilege to see Chaplin, your jaw will drop) so his consistent portrayal of the razor-tongued, cocky genius Tony Stark was as great as ever, but I was impressed by all the others who are actors I’ve liked but not seen complete potential in until  now. Scarlet Johansen did a good job of being a kick-butt female without being the typical self-righteous B**** most actresses portray in action roles. Jeremy Renner has a smaller role but is still a very cool character as Hawkeye, and is just me or does that guy resemble my beloved Nathan Fillion? Chris Hemsworth is definitely perfect for Thor looking in every respect like a Norse god. Maybe it’s the thick gold locks, deep voice or his outstanding delivery of lines, I don’t know. Chris Evans  is often seen as a comedian and he's already done Marvel before, so I commend him for bringing the pure-hearted soldier Captain to life in a supremely believable way. And for being the third actor to play the Hulk Mark Ruffalo added a sweetness and comedic layer to Bruce Banner. Even Samuel L. Jackson wasn’t his typical role in this film. That is the power of good storytelling. 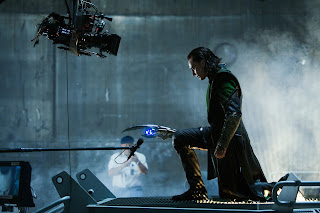 The villain is incredibly fascinating and leaves you wanting more of him, even though you don’t actually want him to win. Tom Hiddleston is mesmerizing as Loki. In this film, Whedon does a great job of showing both sides of Loki’s character. He has a sadness, and a sweetness, that you mourn for, but he’s also the Norse god of mischief and you can see that childish longing for playing with worlds and people as toys and relishing in the awful destruction and chaos he creates. He gets that annoying smirk across his face so perfectly, just as a child would do, when causing trouble. Loki definitely has an ego too, which literally gets smashed by Hulk in one of the most hilarious moments of the film. But also like a child, he has a sort of petty jealousy of his brother, even though its painfully obvious in both the Thor film and Avengers that his brother and father truly love him and don’t see him as inferior. You definitely get the hint in Thor that Loki sees himself as inferior though and has a bitter disdain for his adoption and his root as being a child of the Frost Giants. My hope is that in the next Avengers film or Thor, or whenever, but at some point I desire to see a great redemption for Loki.

My favorite thing about Avengers, if I could possibly pick a favorite thing, is the fact that they assemble as a group. This isn’t a one-man show, this is a team. They clash a lot at first, but as they take time to learn about each other and praise the strengths and acknowledge the weaknesses they realize how each of their talents is not a solo act, but a moving part in the machine that will save and protect the world, perhaps even the universe. I think this is shown a lot in the scenes between Captain America and Iron Man. Of course Tony Stark is a genius and naturally has an ego, Steve Rogers is self-sacrificing but also a little gullible in his rose-colored glasses at times. Tony’s ability to see the truth and not take things at surface level ends up working perfectly with Steve’s ability to lay down his life without question. The two end up learning something from each other in that Steve starts to question S.H.I.E.L.D. intelligently instead of just following orders like a soldier, and in the end Tony sees the value in realizing there isn’t always a way out and he, in turn, is willing to lay down his own life by sending the nuclear bomb into the vacuum of space, a trip that should have claimed his life. Iron sharpens iron amongst the group, and by the end of the film there is an epic long-shot  that  pans over the battle royale showing each of the characters using their strengths and working together to take down the threatening forces.

On the note of S.H.I.E.L.D . I just have to mention that Joss Whedon ALWAYS kills the innocent, pure of intention characters. Though I can see how it’s both necessary and realistic, it’s so cruel! I loved Agent Colson (Phil, haha) of  S.H.I.E.L.D. He’s the one who brought them all together, he is the one who truly believed that each of them was key in saving and protecting the world. And though his death was pretty awesome, he went down in style, it was still sad. R.I.P. Agent Colson. (Wow, I didn’t think I’d have that many acronyms in one short paragraph).

I could rave about this movie for ten blogs. It was a perfectly woven tapestry of Marvel awesomeness: hilarious as heck, fabulous actors, great score, a strong theme, and potential for another awesome film in the future. If you haven’t seen this one, do it. It’s worth seeing at least twice. 2012, so far so good, lets see if you can keep the awesome going. I have a long list of films I’m waiting to experience…(Wow, didn't think I could use the word awesome so many times in one short paragraph either. Well, it is Avengers after all!)