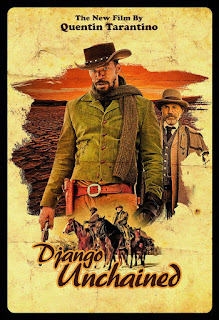 I love when I wait anxiously for a movie for over a year and it does not disappoint. Ah… such a rare and wonderful feeling! Thank you, Django.

Amongst film students it’s almost a given that you’re a Quentin Tarantino fan. I’m not a big fan of his earliest work, but his later films have greatly influenced me as a viewer and an artist. Frankly, there is not one out there who can write a screenplay like he can. With mere dialogue and blocking he can keep you on the edge of your seat. Although his films are known for their violence and other "edginess," its his writing that makes him a master. The intensity of his scenes lasts through their breadth. The characters may be in one room for twenty minutes of film-time just talking and you feel like you’re watching some climactic action sequence. I don’t know how he does it, but dang it, I’m envious. 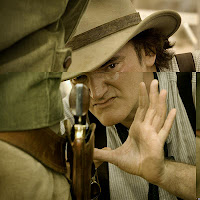 But it is not just in writing that he bests, it’s also in direction. In every one of his films he finds actors perfectly suited for their roles and knows how to get the very best performance out of each of them. A director doesn't merely boss everyone around and call the shots; he must be able to draw out of all cast and crew the excellence necessary for masterful art. It’s leadership AND management in harmony. You can tell, if you look for it, when a film has been made by a person who knows their characters and how to direct actors, and also more unfortunately when they do not. 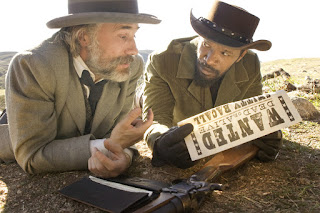 The performances in this film are exemplary, even the straight-man characters like hero and heroine Django and Broomhilda shine. I was most anxious to see Leonardo DiCaprio have a little fun playing the despicable slave master Calvin Candie and he met my every expectation, as did my beloved Chrisoph Waltz. He was even more alluring and charismatic than ever as the strangely naïve bounty hunter Dr. King Schultz. Everyone was as splendid and the biggest surprise was Samuel L. Jackson. He was incredibly creepy and his unexpectedly large role in the film gave him space to really show what he can do. He felt to me as if he jumped out of an old photograph and came to life, his mannerisms, his speech, the way he walked, everything. His character was as interesting as he was disturbing (and hi-larious too). I haven’t seen a performance like this from him since Unbreakable. Good job Sammy J! 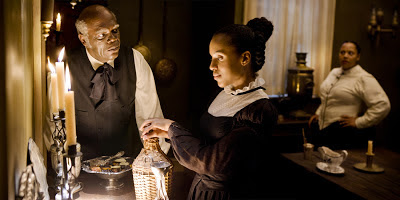 The entire film is a masterpiece but my absolute favorite part of this film is the allusion to the Nordic/Bavarian epic fairy tale legend of Broomhilda and Siegfried. As an avid lover of just about anything resembling a fairy tale, I obviously appreciate it. However not just in my personal taste, but in this case I also appreciate it because it beautifully ties the entire film together. 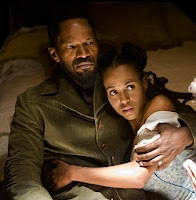 There is a scene where King tells Django the legend, and since Django’s wife shares the same unusual name he sits listening like an eager school child. This is the true beginning of the plot. In legend, Broomhilda was punished for disobeying her father. In most versions she takes up arms and fights on their “enemy’s” side. Her punishment is banishment atop a large mountain where a dragon guards her surrounded by a ring of hell-fire  There she will remain until a hero arises to rescue her and marry her. This hero is Siegfried, naturally. 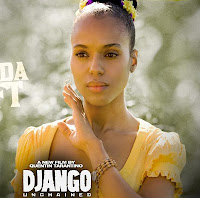 Tarantino took this tale and made it his own sort of savage fairy tale. Instead of Broomhilda angering her father, she angers her former master by marrying Django and attempting to run away. He brutally punishes the two of them with whipping and humiliating branding, then sells them separately. Django ends up in the hands of two brother hicks, symbolically, at the foot of the mountain, and Broomhilda is given over to the fire breathing dragon, Calvin Candie. Django scales his mountain when he comes under the wing of his new partner King Schultz. During this time he trains himself up to be ready to face the fire and dragons that lie ahead in the journey to reclaim his love. Django has many visions of Broomhilda or "Hilde" and sometimes she is in a gorgeous yellow dress with flowers in her hair, very princess like. I love this and thought it was adorable how he sees her versus the reality of her being in the bondage of one of the worst men in the South.

There is also lovely "bromance" also throughout the film between King and Django. King’s heart allows to him to care for Django almost instantly and feeling a responsibility for his safety and his future as a freeman. It’s like the relationship of an older brother leading and teaching his  younger brother until he is eventually more than ready to stand on his own. 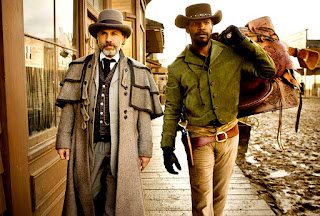 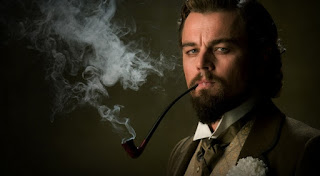 The analogies are quite obvious, the mountain, the hell-fire being all the hell they have to endure to be together, and the dragon Calvin Candie. However, it wasn't until my second viewing that the genius of this symbolism became fully apparent. Tarantino truly makes Monseigneur Candie into a dragon by subtle visuals. His costumes consist primarily of deep burgundies and gold, like the stereotypical dragon scales in fairy tales. Also, this character smokes almost the entirety of the film. He is followed by a cloud of wispy smoke that pours from his mouth when smoking his long, elegant cigarettes. The cigarette sometimes seems like an extension of his slippery tongue. His demeanor and mannerisms were very serpentine. At first when you meet Calvin, you think he’s kind of a silly dandy, but then you realize he is truly dangerous and spiteful not to be antagonized. This of course must also be credited to DiCaprio's spot-on performance and his own way of breathing life into Calvin Candie. 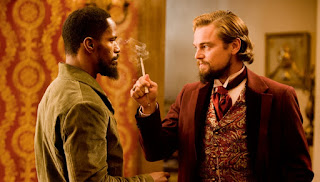 I don’t want to toot the horn of any one film artist, but I gotta say only Tarantino could make a western, fairy tale, slave epic drama and have it not only work but be a cinematic achievement. This film and Inglorious Basterds are two of a trilogy and I cannot wait to see what he comes up with next. My personal vote is that he would make 1001 Arabian Nights in the same way he made Django with Scheherazade as the heroine saving other women from a horrible fate by telling epic stories. Hey, it could happen! Either way I am sure he will cap off this trilogy with another brilliantly unforgettable film. 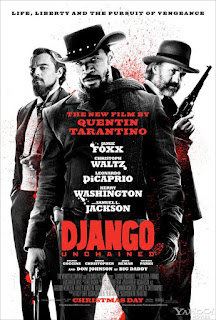 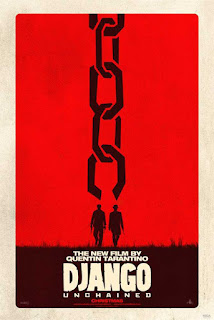