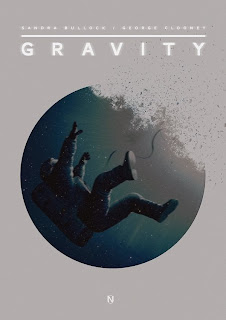 Wow, Gravity... I could talk about this movie all day. It's a film that seems simple and quiet on the surface but there is so much going on underneath. This is MY kind of film because this one is 99% symbolism. What a cinematic feast!

First off, I am just happy to see another film by Alfonso Cuaron. He is so versatile and breathes so much life and meaning into everything he touches. He made a fantastic Harry Potter film (though it wasn't a great *adaptation* it was an exceptional *film* that stood on it's own two feet in the saga) and he also made Children of Men, which is an utter masterpiece and one of my favorite films of all time. I think Gravity and Children of Men are equally exceptional, just incredibly different so kind of like apples and oranges. Anyway, SO happy he came back with fire.

The main thing I want to discuss with Gravity is it's beautiful theme and symbolism. There are many small pieces all under the banner of one large theme: rebirth. The three acts in this film mirror the three stages of human life coming about: conception, growth, and finally the laborious delivery. 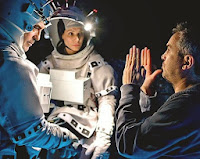 That was the point, for us, of the film. Adversities and the possibility of rebirth. And rebirth also metaphorical in the sense of gaining a new knowledge of ourselves.
~ Alfonso Cuaron

The early stages of the film involve Ryan Stone (Sandra Bullock) working with a team, more particularly Matt Kowalski (George Clooney). Matt is only in the film for a short time but when he is he's like a ray of sunshine. Literally, too, because often times when he is on screen you can see the sun's rays flare across the screen. His positive and encouraging nature is the perfect contrast to her distant, aloof persona. It's the coming together of the two opposite personalities, male and female, sun and moon, just as in conception. His encouragement and leadership as he shows her what to do and points out that she can do it, is the seed that impregnates her new outlook and decisions for the rest of the film.

My favorite moment and perhaps the deepest moment of symbolism is when Ryan is finally on her own. She barely makes it into the space station before running out of oxygen. She removes her space suit and in the simplicity of her form crawls into it's womb. Her entire body is relieved as oxygen fills her lungs and every pore. She closes her eyes and simply floats curling her body into a fetal position, soaking in this comfort and safety. The visuals in this moment are incontrovertibly obvious, and so beautiful. Tubes hang like an umbilical cord, light pours in through the circular airlock, all sound is muffled and hushed. 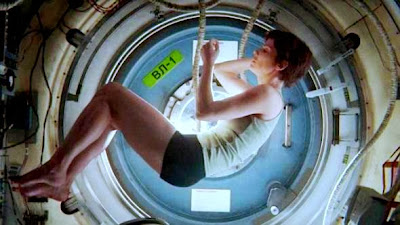 Ryan faces many hardships and struggles, after this, she is growing and transforming and though both of those are good things they are also painful. She not only lost her child, as we learn from a story about her past, but with her daughter's death she has killed much of herself....

We have a character that is drifting metaphorical and literally, drifting towards the void. A victim of their own inertia. Getting farther and farther away from Earth where life and human connections are. And probably she was like that when she was on planet Earth, before leaving for the mission. It's a character who lives in her own bubble. And she has to shred that skin to start learning at the end. This is a character who we stick in the ground, again, and learns how to walk.
~Alfonso Cuaron

I LOVED how space was used as such a layered setting and so specifically utilized. In the beginning they give facts about space and how life cannot survive in it. It's a place of, basically, death. Void of life. Void of anything. Ryan is a doctor, it doesn't make much sense that she would be with NASA unless having chosen to pursue it on her own. It's obvious why she chooses it, the solitude and the lack of connection. You can just close your eyes and drift away from all the chaos and hurt of life, but that's just it, you drift into the only place these things cannot be... a place void of life. Detached. Disconnected. 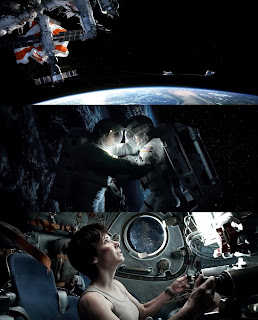 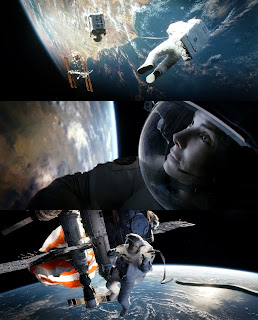 I think this is also very obvious in the moment where she speaks to the Chinese operator over the radio. He is on Earth, you can hear his life happening in the background, the cries of his baby, the sounds of his world. You can see it in Ryan's face how hearing those sounds brings a pang to her, she remembers what life REALLY is.

At her most hopeless moment, she turns off her oxygen, thinking there's no way of going back... of getting back, no point in going on. It is in this moment she is visited by an apparition of Matt. Though Matt is speaking, she is clearly talking to herself, reminding herself of things she already knows in her heart. This takes Matt's form because she also acknowledges who he was in his encouraging nature and how he put her life before his own. She sees now that she cannot waste what she was given by him, the chance that lay before her now to live again. 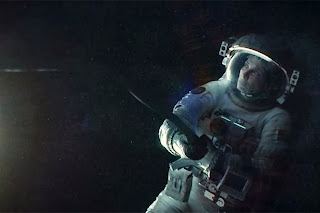 Labor begins when Ryan finally decides she wants to go home and wants to LIVE. The struggle of her descent burning through the atmosphere of the planet is so symbolic of birth. The fire, the pain, the hard push into life. She comes down to Earth and lands in water, a global symbol of life and being born again. Water is the one thing life needs to be fruitful and lush and she is baptized in it. Underwater she sheds her suit for a second time, this time to break free and surface back to life. As she crawls up from the shore, heavy from the weight of gravity, she glides through the mud and mire- the amniotic fluid of her rebirth. Shaky she stands to her feet and learns to walk again, her lungs filled with air that is from an organic source, she no longer bears the weight of her suit and gear. She is free and alive. 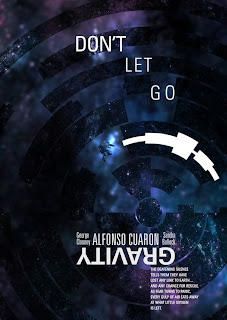 As I write, I am listening to the track "Shenzou" from the film's stunning soundtrack and remembering that ending while listening chokes me up and fills me with so much emotion. It reminds me of the feeling I get when I think about where I once was and the freedom and new life I too was given. Beautiful.

I am also reminded of another song, also bearing the name "Gravity" by one of my favorite artists, Vienna Teng. After I saw the film, her song immediately came to mind. I went home and listened to it and even the lyrics reminded me of Ryan and her journey, her relationship with Matt, and the place he had in her life. So in closing I will share the lyrics and the song right here. If you have not seen this film, please go see it and watch it with eyes open to so much more than just the enchanting visual display.