Reanimating Animation - Secret of the Kells & Song of the Sea

If you’ve been following me for some time or if you know me at all you know I dream of being the next Walt Disney (creatively speaking) and I adore the work of Disney, Pixar and SOME Dreamworks. American animation studios are far from perfect, but there are some golden projects produced by these studios. I want to do a post on Pixar/Disney shorts and the power of short films sometime soon.

However, because certain types of animated films make the most green in our ADHD society, we often bulldoze over the subtler, quieter animated films. Films that are gloriously beautiful, unique, and heartfelt. Other than Hayao Miyazaki’s films and many other churned out of Japan’s successful Studio Ghibli, foreign animation studios are sadly not household names here in the U.S. 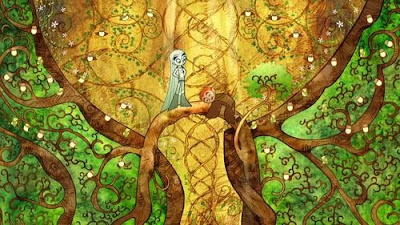 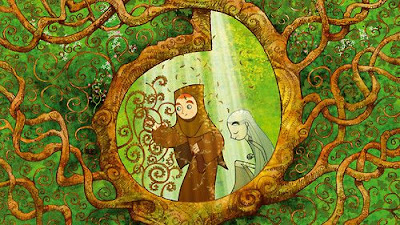 I want to share a little bit about the work coming out of Cartoon Saloon based in Kilkenny, Ireland. I'm a bit partial to things of a Celtic persuasion, but they honestly have created two of the most enchanting animated films of all time, The Secret of the Kells and Song of the Sea.

Both films are based deeply in Irish culture and history. Kells gets it's inspiration from The Book of Kells, one of the Illuminated Manuscripts. An astonishingly beautiful, 4-volume collection dating back to 800 A.D. It contains about 340 folio leaves made of calf-skin parchment. The work consists of the Four Gospels primarily, with various other supporting texts and tables. In the film, the book is referred to as “the book that turns darkness into light.”

In this story we are drawn into the monastic life surrounding the creation of the texts via a young boy named Brendan. He later crosses paths with Aisling (pronounced Ashlynn in the film), a faery girl of Celtic Pagan tradition. 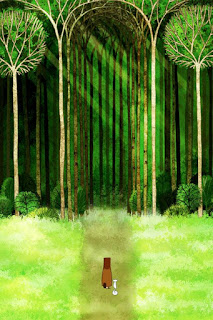 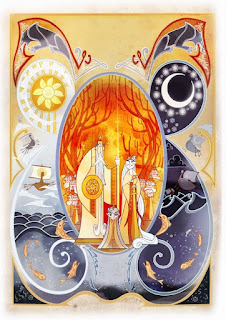 Secret of the Kells is indeed about light in the darkness, focusing on the creation of the Illuminated Manuscripts in conjunction with the aim to defeat the dark pagan deity Crom Cruach, who resides in a cave within the forest. Crom killed Aisling's family and the rest of her people. Brendan and Aisling's friendship sheds light into the dark places. In fact, the song in the film taken from the Irish poem Pangur Ban ends with the lines "I get wisdom day and night, Turning Darkness into light." The poem was written by a Monk about his cat and in the film the cat's name is Pangur Ban.

The style of both these films is similar to the style of Cartoon Network's Samurai Jack (which is a pretty legit show). This method creates very angular, two dimensional characters that seem to pop-out like paper dolls from the ornate, and hyper-detailed backgrounds. Though Samurai Jack originates from an Asian influence, there is similar ground in the contrast of simplicity/complexity between figures and backdrops. I used to think this style was odd, but now I see it as a breathtaking, welcome change for the eyes. In Kells, we see this style taken to the next level with some of the most stunning backdrops in animation history. The use of Celtic knots, plaits, and spirals in the design is absolutely magical, using both nature and man-made marvels to dress the scene. 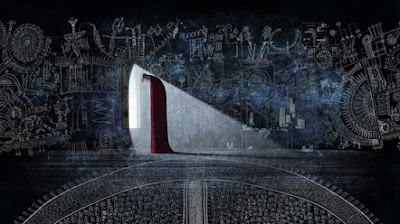 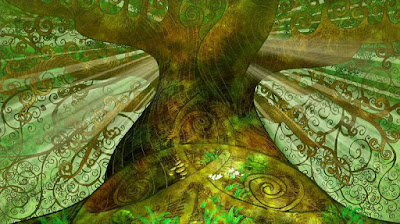 In Song of the Sea we see the same animation design but taking us from the forest to the ocean. Since most of the magic in the film takes place at night, the tones are darker with blues and purples. There's a twinkling, sparkling atmosphere that is very celestial throughout. There is a strong presence of watercolors in the background whose subtlety leads your mind to the water just as the story does. 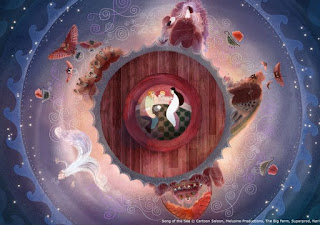 From the moment this film began with the words of William Butler Yeats "The Stolen Child" I was in love. Just like Kells we see the lovely use of cultural poetry. If any of you saw the film The Secret of Roan Inish in the 90s as a child you'll have a nice sense of nostalgia as this film has a very similar plot. Just as the Book of Kells is an important part of Irish culture, so is the legend of the Selkie. Selkies are described as comely women (though there are men too) who can transform between a human form to the body of a seal, shedding their skin when they reach land.
In the beginning, we are brought into a lovely moment between an expectant mother named Bronach telling a story to her young son, Ben. Her husband Conor, a lighthouse keeper, is nearby as well. Bronach "dies" that night in childbirth and we are forwarded six years into the future. Conor grieves in drink and Ben has projected his anger and hurt into his younger sister, Saoirse (pronounced Seer-shuh), blaming her for the loss of his mother. Saoirse hasn't spoken a single word her entire life and often has her mind fixed elsewhere. 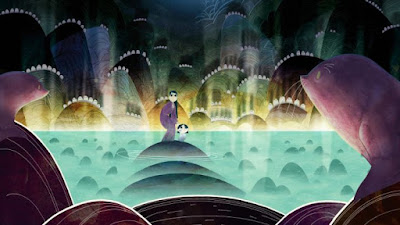 As it turns out, she has a magical connection to this world and others. She discovers a white garment of her mother's hidden in a trunk.Without hesitation she puts it on and in that moment becomes a Selkie, an adorable white seal frolicking in the sea.

Though her father, brother, and grandmother are frustrated with her daydreams and unknown excursions, Saoirse determinedly focuses on her destiny and fulfilling a quest only she can understand.

Song of the Sea is a film about grief and moving on, and how differently people accept (or don't accept) loss. Ben takes to anger and resentment, Conor to drink and depression, but Saoirse seeks a way to connect with her mother and press onward, even though she was born in tragedy. 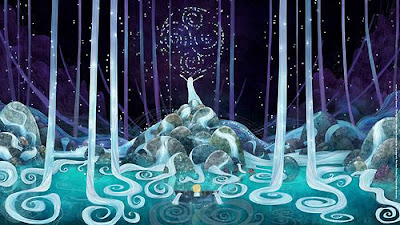 I cannot wait to see what Cartoon Saloon will do next. I highly recommend these two films to any film lover, even if you generally aren't an animation buff. You will be refreshed by their quality and charm. I know Kells is on Netflix streaming as of right now and Song of the Sea is available on DVD. Additionally, both films have absolutely exquisite scores, especially if you're a lover of Celtic music. I leave you with the beautiful "Song of the Sea" to guide you peacefully through the rest of your day. Enjoy!