Peggy Carter: Empowered from the Inside Out 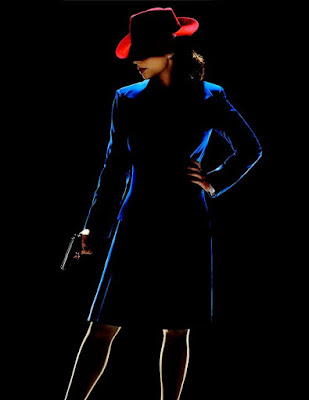 This is more of a ramble of thoughts that came to mind while watching Agent Carter season two recently.  Finally I've been able to organize these thoughts somewhat. This month we celebrated International Women's Day, as well as Women's History Month. In light of this, I wanted to share my own perspective on female strength, especially as it pertains to the lovely Peggy Carter.

I have to admit, I am always on guard when I watch films or shows when a feminist theme is present. It's not that I'm against the message of strong women and female empowerment, OBVIOUSLY. I myself am a woman trying to compete in an extremely male dominated industry, so I know what it's like. I am on guard because when things get preachy and stand on their own soapboxes in storytelling, I immediately check-out, even if it's for something I agree with. Ham-fisted themes and morals sour the experience. (See James Cameron's Avatar for a good example of ham-fisted storytelling).

When I saw a Peggy Carter series was in the works, I was definitely hesitant. I didn't care for Peggy  in Captain America: The First Avenger. I thought she was a kind of a snot. However, the film itself was not very well written or executed, so a lot of that was not the character's fault.

Fortunately for Peggy Carter (and for us!), a show is exactly the platform needed to give the character the justice she deserves. The feminism in Agent Carter is sophisticated and balanced. You will find both fantastic females (Peggy, Anna, Rose) and supportive, loving men (Daniel, Jarvis, and even Howard Stark at times).

The moment that sold me for good happened at the end of season one. Peggy has basically been tossed aside again, and the glory given to men above her. Daniel Sousa really cares for her, so he gets upset when the other men don't give her the credit she deserves. He asks how she can take it, she replies...

"I don't need a congressional honor. I don't need Agent Thompson's approval or the President's. I know my value, anyone else's opinion doesn't really matter." - Peggy

This is where Agent Carter stands out as a program. Peggy understands trying to impress others or prove herself to men just to feel validated is wrong. She realizes simply knowing her own worth and being confident in that is what truly makes her strong. I love that Peggy isn't in it for the credit or pat on the back from the world. It seemed to start out like that for her, but at the end of the day she does what she does because this is her calling and passion, and she's good at it.

I think if we as a society focused less on female validation from the collective, and more on encouraging women to be THEMSELVES and to find strength in their own identity, we would see an astronomical change. Women don't need to be "like men" or even to run with the boys to prove themselves. Peggy doesn't try to be a man. Though she's tough, she's also very feminine, well mannered, moral, and emotionally sound. These are all qualities to be praised, not scorned, and she knows it. In her time, it is a man's world, but she doesn't feel the need to assume the behaviors and attitudes of men in order to thrive in that world. Essentially, you go girl!


"I would hope that young girls can see that they don’t have to sacrifice their femininity to be taken seriously in the workplace, but also that they don’t have to rely on their physicality or their appearance. That it’s important, if not a lot more so, to be able to use their intelligence, their wit, their humor and their warmth to be able to get where they want to and achieve their goals in life."
- Hayley Atwell

Couldn't have said it better.


There has been a very specific image emerging in our culture of what a strong woman should be. This image conveys you need to be a gun-toting, weapon-wielding, action babe in order to be strong, or that you have to embody male attributes in order to be strong. Feminine qualities are often seen as weak or something to be shirked ASAP. Star Wars: The Force Awakens had people salivating over Rey as if she were some new-fangled idea of strong girlhood. However, there are already many similar female characters in existing stories. Kaylee Frye in Firefly, for example, could wear engine grease and fix banged up, old spaceships long before Rey was even in a glint in J.J. Abram's eye. These characters have always been there, but unfortunately they were not always acknowledged and praised the way they should have been.

I love the Furiosas, Reys, Peggy Carters, and Black Widows as much as the next nerd, but they aren't the only examples of female strength. We are narrowing female contribution and potential by implying otherwise.

We received a great (yet very under-appreciated) example of female strength last year in Cinderella. (Funny enough, Hayley Atwell played her dying mother in that film). Ella didn't swing punches or wield a sword, but she was incredibly strong and resilient. She was stuck in an awful situation of abuse, grief, and servitude. Her mother's words to her were "have courage and be kind." Being kind is a remarkable and rare strength. Her kindness, even to others who were not kind to her, shone radiantly throughout the story. It's a Christ-like quality through and through. Ella learns to stand up for who she is an not be ashamed of it. When the prince comes to her in the end, he sees her as the servant she is. She says proudly, "I am Cinderella." What was once a scorning nickname becomes a badge of pride when you find confidence and strength in who you are and are true to yourself. (I talk more about these qualities in Cinderella HERE) 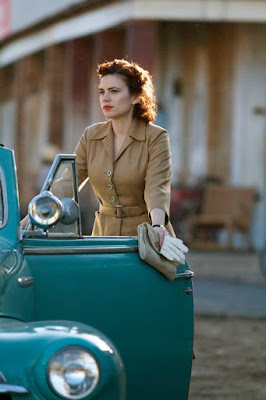 A lot of times when hearing this passage in 1 Peter, I see people squirm in their seats. But why? Why does "gentle" and "quiet" automatically equate to weakness in our minds and not strength? A gentle and quiet spirit takes more strength and self-control than a loud, and harsh spirit that only thinks of itself. Peggy is outspoken and sassy, but she does have a gentle and quiet spirit. She doesn't seek glory for herself, draw extensive attention to her physical beauty, or make everything in her life all about her. She respects herself, guards herself, values herself. She is kind to others, she encourages others to better themselves, she loves her teammates, she lays down her life daily as an agent for her community and for her friends. She knows she fights for something greater than herself and, even if she never gets the fame and glory, it's apparent throughout the story that the greater good is sufficient for her.

She is empowered from the inside out.

The fruits of the Spirit are love, joy, peace, patience, kindness, goodness, faithfulness, gentleness, and self-control. It would be revolutionary if these qualities became the ideals of strength, not just for women, but for men too. I love seeing the good guy kick butt, but I feel an even greater admiration when the hero's brightest light is glowing from what is inside. The very heart and depth of a person. As a society we have praised and elevated outward appearances - looks, practical skills, physical strength, social status, occupation - that we have forgotten to look at the heart, as God does. Think of how less dark the world would be if we let light those inner lights be what shines brightest.