Dear Walt, Wish You Were Here... 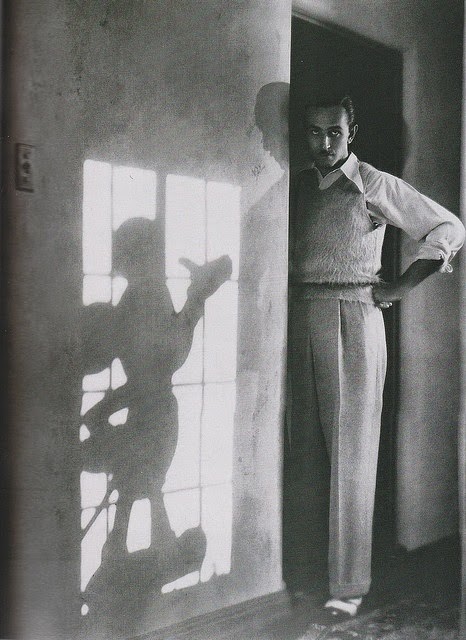 Wow… it has been a struggle to write in here lately. Not because I haven’t had time. I’ve actually had time for once! But I have been feeling so uninspired and I can’t just crank something out without inspiration. It’s too hard for my heart haha.

I know people were asking if I would do a follow up to my most popular post on X-Men: First Class by doing X-Men: Days of Future Past. Now I LOVED Days of Future Past, it was brilliant, but for whatever reason I just felt no inspiration to write about it. I think because it’s so connected to First Class that I feel like I would be writing about a lot of the same things. It’s a connection story binding X-Men films together and thankfully undoing the damage of the deplorable Last Stand film. But even still, in all it’s awesomeness. I just don’t feel like writing about it…. Sorry!

I think the reason for my lack of inspiration to blog is I have been very upset about the film/television world lately. Mainly my beloved Disney and what their company is doing, but even just other aspects in general. I wrote a post last December kind of a long these lines, but my heart just grows sadder and sadder each day seeing what’s happening in my beloved industry and how certain creative engines are being destroyed. As a passionate creator, I have actually been very depressed about it lately, to tell you the truth. 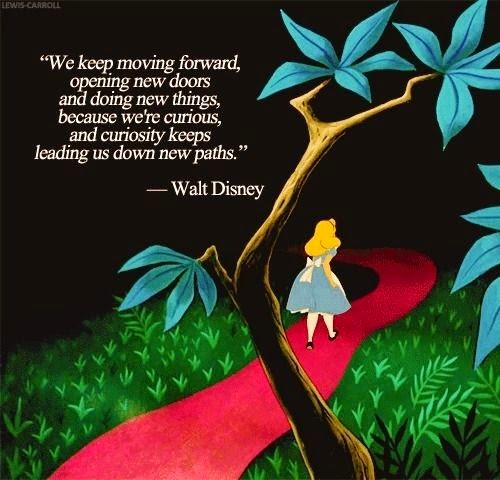 It does mainly root in how I currently feel about Disney and ABC. You see, I don't just like or enjoy Disney... I LOVE Disney. It pretty much goes back to the first days of my life. Walt’s films and ideas shaped who I am in a way that no other culture has. I have a natural love for all things fairy tale, but it was more than just that. His innovation and his constantly expanding mind and ideas I could relate to even then. Walt Disney was the first biography paper topic I ever wrote about in school (I think I was about 8) and he was the first person I wanted to be like. I don’t like to make earthly idols of people and things, but Walt Disney comes very close to crossing that line. People always try to chime in and tell me about unsavory things about his character or what he thought and I just want to tell them to shut up because I don’t care. His personal life isn’t why I admire him. I have always been in awe of his creativity that never ceases, his ideas that literally shaped and molded culture, changing the film industry (and storytelling in general) forever.


Walt wasn’t about the money. One of my favorite quotes of his is “Money doesn’t excite me, my ideas excite me.” I completely understand that. I have never wanted to be rich and famous, but I HAVE wanted to make big films that will make an impact the ways his have. That’s the priority. Ideas are why we do what we do. 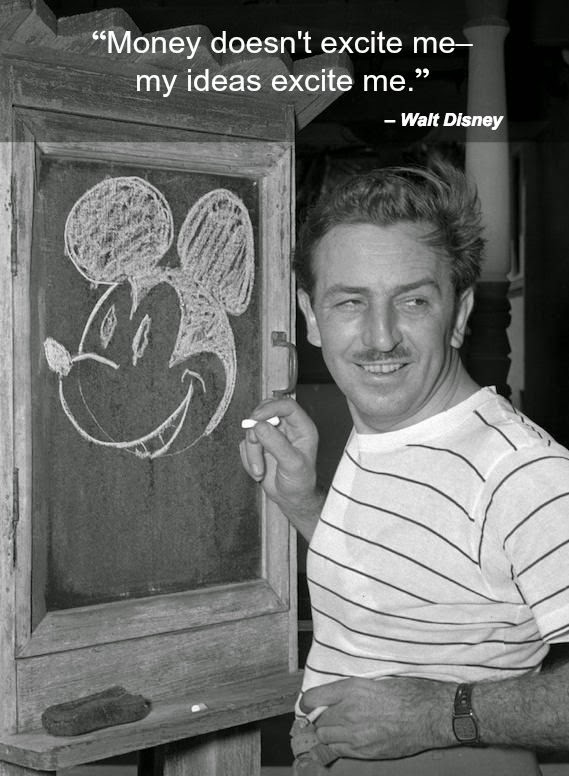 But obviously, somewhere along the way, Disney as a company lost sight of Walt’s true vision. Walt was a risk-taker and a culture shaker and money wasn’t the objective but rather the result of just being creative and sharing it with the world. He also said, “We don’t make movies to make money, we make money to make more movies.” But today the objective of his company (which now has engulfed ABC and several other companies) has reversed that thought. They now unfortunately do make movies to make money, and when you do that, you completely spoil and confine the boundaries of the creativity. They are playing it safe, but the ironic thing is there is nothing safe about letting the minds of the general public decide how and what you create. Disney didn’t give the people what they wanted, at least not intentionally. He made what he wanted to make and the people fell in love with it on their own.

Disney is now just regurgitating old ideas, recycling old stories and old productions. This is NOT moving forward. This is not the root vision. The company as a whole is like a carousel. They are just going around and around in circles heading nowhere new and pretty soon it will cause so much dizziness that the world will be sick of it and give up on them forever. But if Walt were still here he would make those horses fly right off the carousel and into a new world… in fact, he did that literally in one of their greatest pictures... 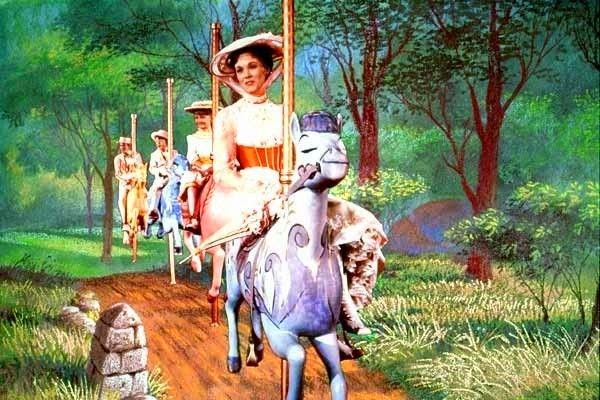 Now I explained in a previous blogpost (http://reelreflections11.blogspot.com/2013/12/yo-movies-what-gives.html) my problems with Frozen. I don’t dislike the movie, in fact most of it I really loved, but it fell short in so many ways it left me feeling a dissatisfaction. It was missing something. In my own opinion, Tangled and Wreck-It Ralph were far superior because they were created by people who seemed to understand Walt’s ideas of new ways and new worlds. But anyway, another good example I can give of carousel story-telling is Maleficent which came out this year.

I liked the film, but I didn’t love it. It wasn’t because of anything mechanical… the actors were superb, the visuals beautiful, the score fantastic, and the idea of the retelling was great. However it was the execution of that idea that made the movie fall flat. 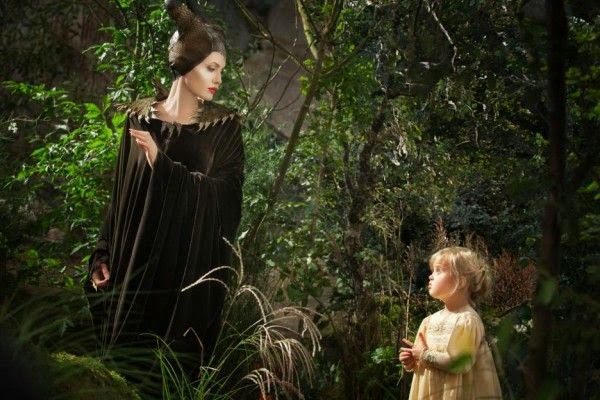 Maleficent introduces some great new twisty themes to the tale of Sleeping Beauty. The best parts involved Maleficent having a relationship with Aurora’s father Stephan, a man who claims he loves her and then ultimately betrays her in the worst way. I loved this dark idea presented by both Maleficent and Stephan… the idea that true love doesn’t exist. It’s so sad and so twisted and it’s an idea that causes them both to fall away into darkness, each for their own reasons.

The movie then twists the tale even further by having Maleficent and Aurora form a sort of mother daughter bond and that mother’s love being the true love that breaks the spell and awakens Aurora from her sleep. True love takes many forms and shapes and meets us in so many ways. I like the idea that romantic love is but one of those loves and showing Maleficent that true love does exist and is alive within her. This was a wonderful theme!

But the film made some mistakes. Numero uno is that it was rushed… ugh just like Frozen and just like every other movie being cranked out right now. The story fell victim to this ADHD catering our culture seems to be obsessed with. It’s crap. Secondly, it also fell victim to commercialism and appeasing people to get butts in the seats. Mainly this was brought up with Prince Phillip who was an utterly pointless character and the movie did not need him to be good or to make it’s point. But they felt, as they always do, that if there’s isn’t some cute One-Direction-wannabe actor in it, girls won’t go and see it. Stop insulting everyone’s intelligence! Not having Phillip in the movie would have been a risk but it would have been one worth taking. His presence was jarring, random, and completely unnecessary. Personally, I was hoping they would twist the tale even further and have Aurora fall in love with Maleficent’s “servant” Diaval who was much hotter and cooler than Phillip haha… but that’s my own imagination at work. 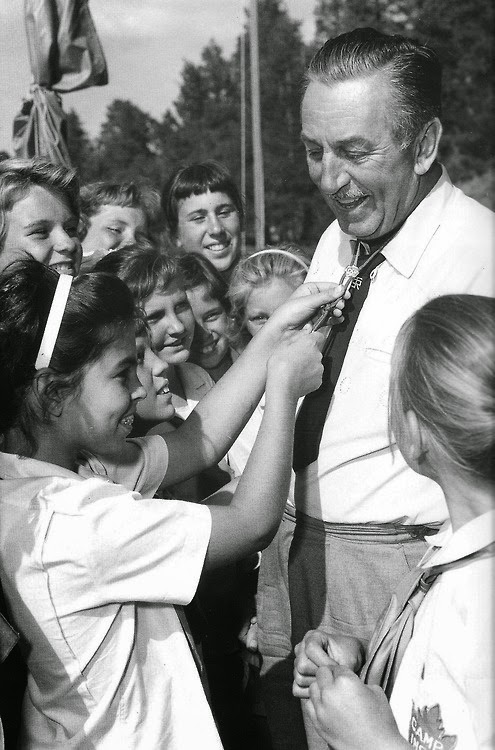 “I don't believe in playing down to children, either in life or in motion pictures. I didn't treat my own youngsters like fragile flowers, and I think no parent should. Children are people, and they should have to reach to learn about things, to understand things, just as adults have to reach if they want to grow in mental stature. Life is composed of lights and shadows, and we would be untruthful, insincere, and saccharine if we tried to pretend there were no shadows. Most things are good, and they are the strongest things; but there are evil things too, and you are not doing a child a favor by trying to shield him from reality. The important thing is to teach a child that good can always triumph over evil, and that is what our pictures attempt to do.”

In my previous post regarding Once Upon a Time I explained how the show spiraled downhill. This was also the handiwork of post-Walt Disney, commercialism, and fan appeasement to get ratings and to make money. ABC and all involved made horrible decisions for that show that desperately need to be fixed. The show went from 2.5 brilliant seasons to flushing itself now swirling around the toilet bowl of entertainment. I am mad about a lot of things they did that show, but I think the commercialism has me the most upset. I HATE that they are bringing in Frozen. First off, the movie just came out, give it a rest! But I suppose there is no rest when there is more money to made. Secondly, Frozen isn’t even the best source of the fairy tale, it’s Disney’s completely retold version of the Snow Queen. OUAT is now about remaking Disney movies and not about retelling fairy tales into their own story which is how it began. I can’t imagine the Frozen storyline will be even remotely good, but because I am a true fan I will stay loyal to the show… for now… and see how it plays out. 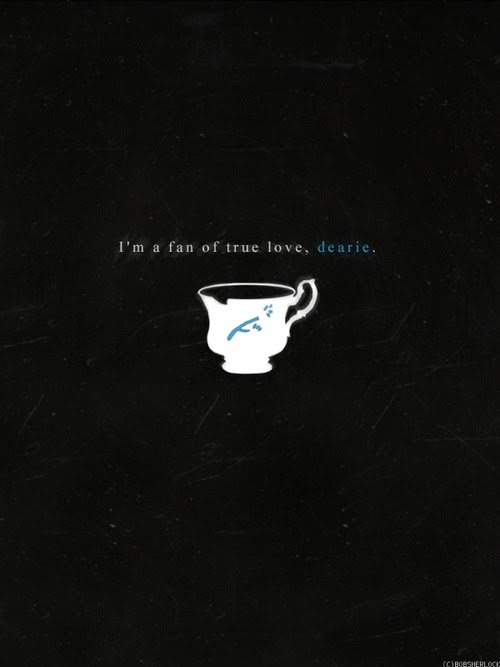 If you feel like I do about the wretched decisions ABC and the Once writers have made for the direction of the show, please post with the hashtag #FixOnceUponATime and tell them you aren’t happy. If all the Captain Swanners and Frozen fanaticals can make an impact, than so can we. If we ban together to reclaim the heart, soul, and roots of a beloved show we can have a chance to pluck it from the toilet before it officially reaches the sewer of entertainment.

Anyway, I know this has been kind of a rant. But in my depression about the state of our industry and art, I just can’t bear to hold these feelings inside. We have to stand for good material. In an age of a gluttony of content, we must strive for quality not quantity. Our aim must be to please the story and everything/everyone else second. To be true to our hearts and the hearts of the stories we are telling. Stories are living things, but if we keep going the way we are with film and television they will soon become an entirely artificial intelligence.

“Fantasy, if it's really convincing, can't become dated, for the simple reason that it represents a flight into a dimension that lies beyond the reach of time.”

(All quotes in this post from the late, great Walt Disney)

P.S. Did you know they are making a live-action Dumbo film with a guy who helped make Transformers? Heaven help us all! I can only say, WTF!?