A World on Fire - Netflix and Marvel's Daredevil 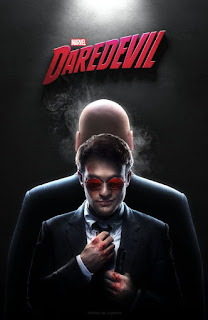 Remember that movie in 2003, the first time Ben Affleck tried to be a super hero? Though it's always cool to watch Jennifer Garner kick butt and do her own stunts like she did in the amazing series Alias, but it wasn't enough to save that movie as it was rightfully laughed right out of the box office. (For your own necessary enjoyment, watch the Honest Trailer HERE)

Though the film was terrible, I was drawn to the concepts of the narrative below the surface. The Gothic, film noir atmosphere, the blind hero, the Catholic faith. Spires. Streets. Shadows. Blood. Netflix was able to pick up the pieces of the narrative the movie messily left behind and create something worthy of those unique elements. The opening credits alone present this beautifully. Justice. Angels. Devils. More Blood.

I was blown away but the fullness of the characters. They are well-developed, multi-faceted, and still manage to surprise us. The two adversaries are the heart of the show. We are shown two sides of a very tough coin through the eyes of two men who are probably the most intriguing characters currently on TV in general. Matt Murdock (Daredevil) and Wilson Fisk (Kingpin). 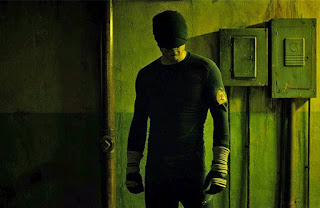 The Daredevil lives in the underbelly of the city he loves, a place commonly referred to as “Hell’s Kitchen.” Blinded from an accident in his childhood, Matt describes what he sees in his blindness as “a world on fire.” This extends into the physical world he inhabits. Concrete, brick, glass, asphalt, metal. All painted with high-contrast lighting, bold fiery hues, and the blackest shadows. The office Matt occupies with his friends and co-workers Foggy and Karen, his apartment, and just about everywhere he goes is overwhelmed by this imagery. Even his glasses are tinted red to further emphasize how he sees the world. Red is the color of rage, passion, fire, and yes, the devil. Hell’s Kitchen is full of people with heart, but it’s in utter chaos daily.

Clean, modern, minimalist, glass, white. This is how we see the world through Wilson Fisk. His money folds as crisply as his suits. Color coded closet, the same breakfast every day, routine, structure, order, system. Wilson appears to be a quiet man of civility on the surface. He even pours green tea in the culturally correct manner he learned abroad in Asia. He observes every courtesy, every manner of grace to those he respects. Yet, for all his orderly living and respectful manners, there is a coldness in his voice that cuts through his presence like a razor. 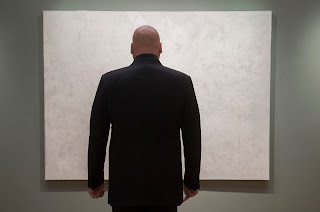 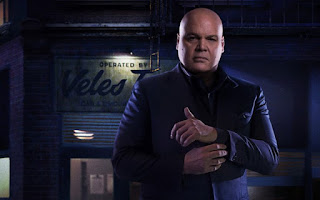 Matt's rage comes from the outside in, Wilson's comes from the inside out. Their righteous rage is what binds them together. Matt’s father gave his life so his son would know he was honorable, Fisk killed his father so that he would no longer abuse and torment his family. Matt trained at the highest level of martial arts and went to law school. Fisk learned the arts of business and culture. Both self-made men find themselves at war with the other when their passions and visions for the city collide. What's unique about these two is that they both believe what they are doing is genuinely what's best for the city and initially their morality isn't that far apart.

Vincent D'Onofrio gives a thoroughly unprecedented performance as Wilson Fisk. His character has so many layers, motivations, and emotions you have absolutely no idea what he'll do next. He's shocking and alluring. There's a placid quality to his courtesy and respect, but once crossed he becomes a geyser of reaction. In most portrayals of "the Kingpin," the character is seen merely as a fat mobster in a gray suit, but D'Onofrio's Fisk has a sensitive, beating heart. It's this sensitivity that gets him into trouble. His decisions and moves are often made with emotion and compromise.

This was shown to us very vividly the morning Vanessa (the beguiling art dealer he falls in love with) wakes up next to him. We see his normal routine heavily influenced by her. She eats breakfast with him, picks out his suit and cufflinks, dresses him. He lets her, though he seems uneasy about it throughout the entire montage. His love for her allows him to compromise his own routine and later we see it allows him to compromise everything he's worked for. It's not that their love isn't genuine, it totally is, and it's not that love shouldn't be the most important thing, it should be. However, when you are a person with a tendency to be completely consumed by your emotions love can go from nectar to poison quickly. 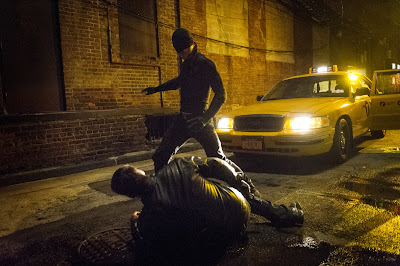 Daredevil (though he dons neither the suit nor the name until the end of the series) lives up to the name. He's no saint. His world is one of cuts, bruises, stitches, and broken bones and he gives just as much as he receives. He uses brute force and often finds his ethical rage leading him down a path of blood and pain. The violence in this series is graphic, but not gratuitous. It's a hard reminder of reality, especially Hell's Kitchen's reality, which often leads lambs to slaughter along with the wolves.

Initially Matt is known as "the man in black" or "the devil of Hell's Kitchen." He wears a black outfit any guy could throw together. I think it was a byproduct of convenience as much as it was for symbolism. When he was "the man in black" he was vulnerable. No armor, no way to contain his rage or protect himself.  This openness often left him bleeding in dumpsters and putting himself and those he cares about in harm's way. There is an old-fashioned recklessness in the way Charlie Cox portrays Matt and that helps to better justify the vigilante name he later chooses for himself. 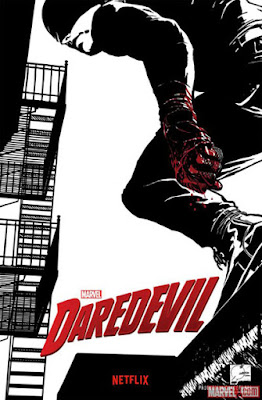 Matt is also plagued with his emotions, but not in the same way. "Stick," the man who trained him in martial arts, begged him to let go of his attachments to people, implying that they slow him down and prevent him from becoming the soldier of righteousness he's meant to be. Matt refuses. He chooses to have relationships because he knows that while life may be easier without them, he would lose sight of what he's fighting for if he broke away from those he cares for.

In the early episodes, we learn about Matt's relationship with his father, Jack Murdock. He was an "average Joe," but he loved his son more than life and wanted him to be the best he could possibly be. Jack made a living as a boxer. Matt saw daily that violence is what put food on the table and he was the one who patched up his dad's wounds after every fight. When Jack was asked to lose a fight to help some shady people make big money, he accepts, until Matt tells him he needs to win and shows how much he believes in him. Unwilling to be a coward in his son's eyes, Jack fights and wins. Though he wins in the ring, he loses on the streets, murdered shortly after the match because of his defiance.

When Matt's earthly father dies, he turns to his Heavenly Father. One of my favorite aspects about Daredevil is Matt's faith. He's far from perfect, and often finds himself in confession. He struggles with his belief and doubt, but it's his faith that sets him apart from the real demons in Hell's Kitchen, as well as the other super heroes in the Marvel-verse. 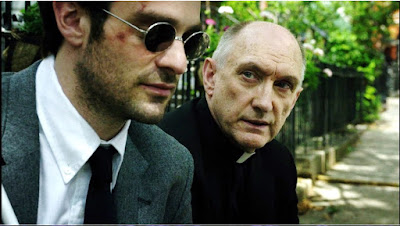 Matt and his Priest have a solid relationship. Father Lantom has open arms and grace in spades. However, if you're thinking he's the next Uncle Ben or some all-wise oracle, think again. Lantom is a very relatable character. He questions Matt's motives, but asks Matt to examine himself rather than rely solely on him for sage advice. Lantom admits when he isn't sure of something and has no problem telling Matt hard truths un-apologetically. Their conversations are amongst my favorite moments in the series as they are truly character defining and inspiring moments for the Daredevil journey. I hope season two will explore this on an even deeper, personal level for Matt.

To conclude I will say that Daredevil is a nearly perfect series. The "nearly" part is because they totally dropped the ball on the adorable Foggy/Karen development toward the end. It was as if the show completely forgot all their build-up from the beginning of the season. (Seriously, WTC Netflix?) Other than that, this show is a masterpiece for the small screen. I would recommend it to anyone even, and perhaps most especially, to people who aren't normally fans of comic-based stories. 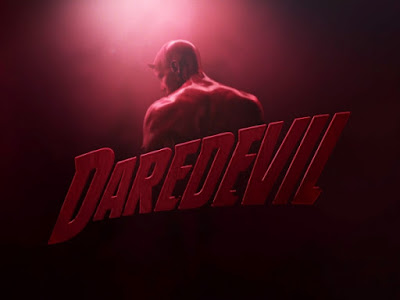