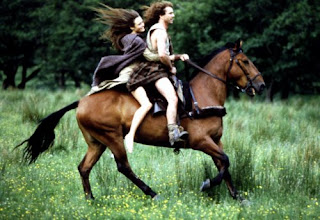 This scene comes from what is possibly my favorite movie of all time, Braveheart. Oddly enough, even though the main characters are in this scene, it doesn't have anything to do with them, it's made beautiful by two complete "nobodies" in a sense.

I've labeled this post Prima Nocte, which is latin for First Night. Prima Nocte was a law instituted where English nobles and lords could have sexual rights to Scottish women on the night of their wedding. Basically taking the right from the husband and hopefully implanting "English seed" to weed out the population of the Scots. Now a lot of people have discrepancies over whether or not Prima Nocte actually happened historically. Some say yes, others say no, others like me say who cares? This movie is phenomenal. It tells the story of a man, William Wallace, who was real but also something of a legend. So it serves right that it would have some stretching of truth in the legend. The Prima Nocte idea served as a significant vessel for telling the story cinematically so whether or not it really happened, we must set that aside. Anyway...

The scene is in the first act of the film. William Wallace has returned to his home area in Scotland after 20 years of traveling Europe and studying with his Uncle Argyle. Once he's home, he stumbles upon a wedding where all of his old friends are in attendance; among them his best friend Hamish, and the woman he's loved since childhood, Murron. The party continues to celebrate with joy a young couple's union. It's lively and brightly decorated with flowers and all things in nature. The setting often reminded me of something ethereal, and the young women decked in ribbons and wreaths were like little fairies dancing barefoot in the grass. The music is spirited, Celtic tunes. Wallace can't stop staring at Murron and gets challenged by Hamish to some "Highland Games". Wallace wins.

In the midst of the celebration, the English guard come thundering in. The music dies and everyone stops in their tracks. Their leader demands his "noble right" of Prima Nocte with the bride. This causes an uproar from the men, particularly that of her new husband. The soldiers apprehend people before a riot can truly break out.

The bride. She is something to behold. She is simple in almost every way, and pretty but again in a very subtle way, Scottish girl-next-door kind of look. But Gibson in all his directing genius makes her light up the screen. She is wearing a drapey "dress". Her hair is amazing, a subtle, reddish hue, down with little braids throughout. A wreath of flowers and leaves crowns her head. Her make-up is beautiful. Her skin a lovely ivory with the lightest dusting of coral on her eyes and cheeks bringing out the "blushing bride" and giving her a youthful glow and fantastical, wood-sprite appearance.

The scene now mutes out all sound except the music and things slow down, but not exactly in typical slow motion. This really generates the sorrow of what is happening to this couple. She is held by a soldier, but in one swift, elegant move she breaks free. The soldier doesn't seem to fight for her on this. She commands the scene and those around her with her presence. I call this the power of "a gentle and quiet spirit". She walks over to the soldier holding her husband while another has a spear pointed at his throat. The music is harp and woodwinds, it quiets down the moment just as she quiets the fray around her. She lightly, deliberately touches the soldier holding him. This is one of my favorite parts, the soldier looks at her as she makes her way around, he looks surprised, almost entranced. His grip even loosens a bit as he is distracted. With great care, she then touches the spearhead the other soldier has pointed at him and slowly pushes it away from his throat, getting him out of danger.

She then tenderly puts her cheek to her beloveds and whispers "It's alright, everything will be alright..." (it's inaudible, I am just reading her lips). I might mention that as all this is happening, we are getting reaction from the crowd, from Murron a look of heartbreak, from Wallace a stern, inexplicable look, and from the others almost a sense of awe at what they are witnessing. The bride then kisses her husband in a way that can only be described as meaningful. She slowly opens her eyes and looks at him, backing away toward the English Lord on his horse. Her eyes never stop looking at him, and they say so much. They give hope in a most horrid situation. He looks back at her, shuddering at the thought that they are separated, and then she glances again, this time she does look frightened but maintains her composure. Her husband shakes the English guard holding him off his body. I love the look on his face at this part, not because of what has happened to him, but in just one look he shows exactly what a man ought to feel at a moment such as that: robbed, angry, worried, and devastated for his bride. It's all in just that short moment in his face. The bride rides away with the English and the party scatters.

I remember watching this when I was 14 and being just in awe. This movie made me cry in several places, but I remember feeling the intense power of this particular scene. It's one of the worst things anyone could imagine happening to themselves. To be 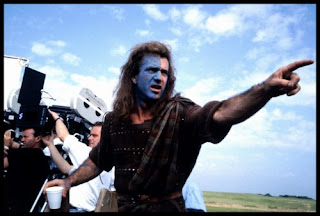 robbed of the right to be given fully to your beloved, to be the prey of another who seeks you with malicious lust. For the bride who is to be violated, and the husband who has to be helpless in the fight for her. What a wretched prison to be stuck in! Mel Gibson is such a fantastic director, I could do at least 5 scenes from this movie alone to write blogs about, but I won't for variety sake. All I can say is I hope another movie is under way from him!
Posted by Alexis P. Johnson at 2:32 PM