"Death favors no man..." ~ Snow White and the Huntsman 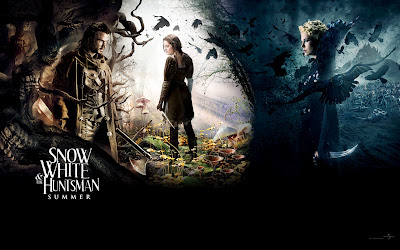 I love fairy tales, they are my favorite stories. The darker the better, though I do like light and funny ones on occasion too. Fairy tales are another form of parables, as they are stories with deep meanings put very simply and memorably. I am glad these kinds of stories are making their way to the big screen again, as I hope to one day make my own live-action, fairy tale epic or two. Not only that, but we as a culture are hungry for stories of passion and purpose, stories that reveal truths using imagination and bringing up fresh water from the wells of our dreams.


It was the beautiful banner (above) hanging in the cinema that hooked me into seeing Snow White and the Huntsman. The visuals of the film are just as captivating their promotional artwork and trailers promised. Breathtaking cinematography captures not only a phenomenal setting, but also emphasizes the importance of color in storytelling. It was rich with the fantasy element but also raw and choppy to bring realism to the scenes. This film had much of the feel of Elizabeth: The Golden Age in style right down to its strong, metal-plated heroine, and all woven with the magnificent score provided by one of my absolute favorite film composers James Newton Howard. I could go on and on about the technical proficiency of the film, but my aim is always the film’s heart and for fairy tales that is the most important element.

I worked for a theater company when this movie was out, and whenever people would exit the auditorium I would always hear someone say, “ But, Charlize Theron is so much prettier than Kristen Stewart….blah, blah...” Sorry if I sound pretentious, but, these people obviously missed the entire point of the film.


Queen Ravena is aesthetically more beautiful, why shouldn’t she be? She poured every bit of money, effort, magic, and time into making her outer appearance young and beautiful forever. Ravena also missed the point. If she had cultivated her inner character half as much as she cultivated her looks, she would have been much stronger in every way. 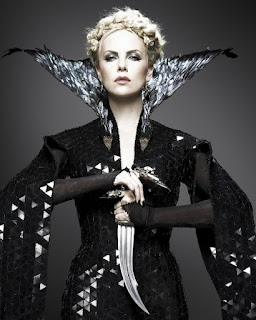 The point of the story is that Snow White focused more on her inner character. She spent most of her life looking dirty and shabby in prison, and spends almost the entire film staying that way. She isn’t wasting precious time on perfecting her outer appearance; her heart and her time are dedicated to helping her people and seeing the success of a good and righteous kingdom. Her strength and passion, purity of heart, and nobleness of intent are what made her fairest. Her passion inspired men to fight at her side, whereas Ravena only used magic and fear to do so. In that light, who of the two is the more powerful one?


Ravena grieves from years of abuse and instead of preventing abuse to anyone else, she uses her suffering as a weapon. She is highly against men and blames them, claiming that men only want what is young and beautiful and that both of those things are the source of power. Ironically, she is enabling the very thing she stands against. By using her beauty, and even her sexuality to a degree, as a weapon, she is saying that those things are the only way a woman can become powerful. It’s an extremely counterproductive and non-progressive way of thinking. So the reason she is so easily defeated in the end was because Snow White had found the way to truly govern people and leave a lasting impression through the strength of good and noble character. Ravena had only put her vitality into her beauty, and since beauty always fades, she would never be capable of true and lasting power.

Instead of pushing against men, Snow White actually draws her strength from them as an equal. The Huntsman, for example, is key to Snow White discovering her own confidence. Instead of doing everything for her, he teaches her and stands with her. It takes him a bit to see her strength, but when he does he doesn’t let her just sit there feeling sorry for herself, but encourages her to defend herself and her people. 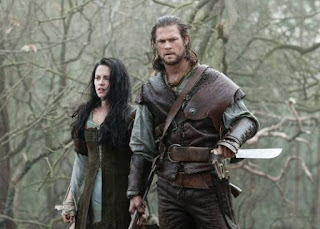 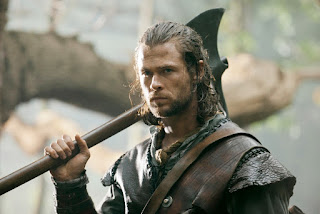 Oddly enough, even with two men who love her, this movie isn’t very much about the romance. Her childhood friend, William, is a man of good character, but lacks the fiery personality and presence of the Huntsman. The Huntsman was easily my favorite character. Though he is definitely very rough around the edges he has a poetic and gentle inner spirit. The speech he speaks over her “dead” body was absolutely beautiful. I don’t know if it’s the words themselves or the simple and direct way Chris Hemsworth has with line delivery, but who hears “…you’ll be a queen in heaven now and sit among the angels…” and isn’t melting? Chris Hemsworth is showing more and more that he can carry a movie. His acting and screen presence have grown tremendously and I look forward to seeing him in more challenging roles in the future.

This isn’t an original story, but it is a very original way of telling it. For instance, the scene where she kisses William poses a very well-done change. Typically, the Queen comes as an old beggar woman to tempt Snow White with an apple. For obvious reasons, that would not work in this story. So she comes to her as her dear childhood friend and the apple is part of a game they played. Coming to her as someone she trusts is far more treacherous than using the guise of a stranger. Also, it’s more believable and yes believability is important even in a fantasy, perhaps even moreso in a fantasy.

Another change I really enjoyed was the way they presented the dark forest. The beloved Disney version shows Snow White fleeing for her life and hallucinating frightening images in the darkness. In this version there are plants camouflaged in the ground that emit a cloudy gas (drugs, pretty much) that make you hallucinate and that is what makes the forest so terrifying. As the huntsman puts it, “the forest feeds off your weakness.” 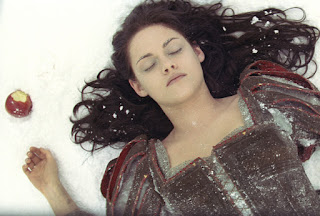 So it's common knowledge that I hate Twilight and everyone in the world seems to hate Kristen Stewart, but she honestly wasn't bad in this film. She wasn’t Bella. She does have some things she could work on in her performances, for example she has this natural way of having her mouth open ALL THE TIME. She isn’t the first actress I’ve known to do this, it’s a personal habit, but it’s definitely distracting. Anyway, with time she has the potential to grow and learn, especially after she scrapes the final awful Twilight movie off her plate.

Though I really enjoyed this film, I do regret that it didn’t have as much character development as I require in films, so points taken off for that. Thirty minutes longer for characters and plot development would have made this good film great. I know I say this every time I write about a blockbuster these days, but rushing stories is a huge pandemic in contemporary film and it must be cured. There is no excuse for it in a fairy tales especially, when the epic-ness of the story is already there and you have only but to flesh it out. We are nothing, filmmakers, if not master storytellers. The means make the ends more satisfactory, and what happens in between Once upon a time and Happily ever after is even more crucial than those famous lines themselves.
Posted by Alexis P. Johnson at 7:24 PM