You Win or You Die - Yep, it's Game of Thrones! 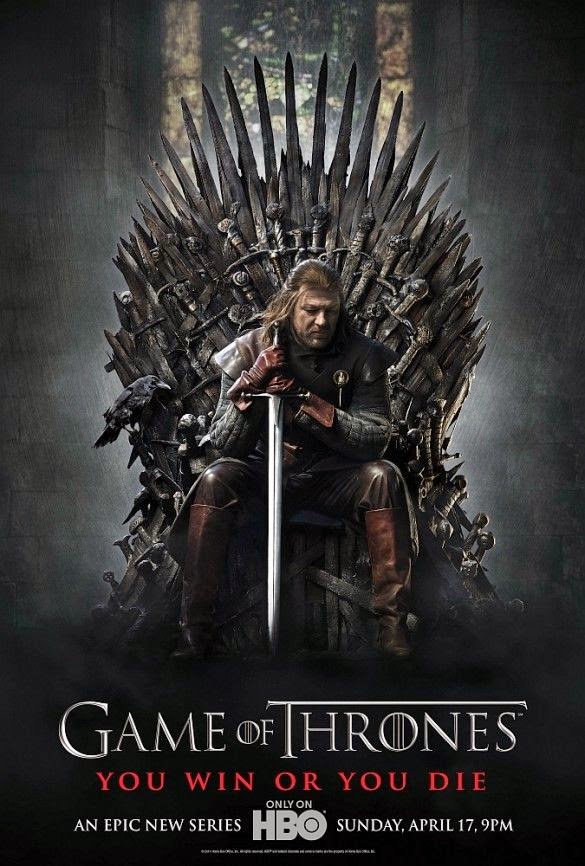 Hey guys! It's finally time, winter is coming! Oh and ...

At this point I am only going to write about the television show as this is a film and media blog and I haven’t read the books yet. One of my 2015 goals is to read all the books in preparation for George R.R. Martin’s 6th book The Winds of Winter. (Odds are, he may actually be done by the time I am haha). On that note though, I do have a couple of friends who have read the books, and one in particular is like the Game of Thrones historian fanatic so I know quite a lot for someone who hasn’t delved in yet. 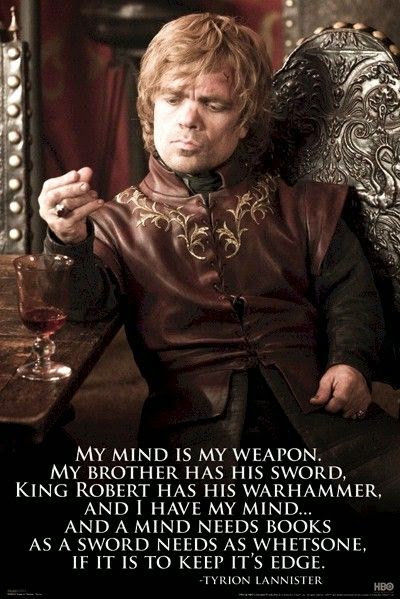 I laugh a little as I write this because when I started watching the show, I was only going to watch one episode…  you know, just to see what it’s like… I did NOT want to be a bandwagon fan and moreover I was only watching it because I heard of certain characters and was interested in them.

Welp, 4 binge-sessions later I finished season four and can’t stop thinking about it. It’s been the most enveloping story for me in a long while. It’s like watching a spider create her web, so intricate and complex, an instrument of both beauty and death. I just can’t turn away until I see it come full circle.

Like anything else there are things I love and things I don't. I like ending posts on a positive note if possible so first I’ll go into what I don’t love about the show so that I can end on what I do.

What I don’t love… 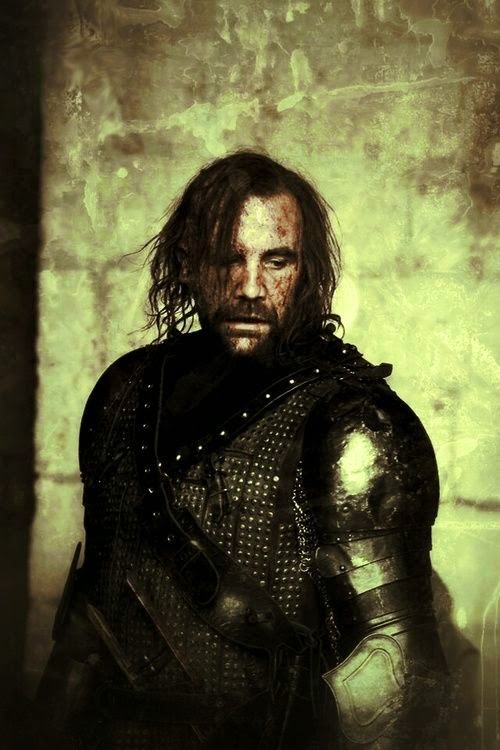 Yes, I'm a prude for saying this and I don't care. I hate how HBO, well, HBOifies everything. What made me hesitate to watch GOT in the first place was HBO’s inexplicable need to make everything over-the-top and excessive. Now HBO isn’t the only offender, Showtime and Starz and many other premium channels also get a kick out of their ability to show everything, but I think I am not the only one who wishes things were a little more veiled.

The sex and violence in GOT is completely unnecessary. Not that things don’t happen in the books, but from what I’ve heard a lot of the gratuitous scenes and especially the sexual content have been twisted and magnified in the process of book-to-screen adaptation. HBO feels like people won’t watch if there isn’t something shocking or sexually stimulating every five minutes, but I can assure you the plot and dialogue of GOT are so intriguing that adding all this feels like someone just threw a full garbage can all over a sumptuous feast table. It isn't enough to make me stop watching, I can omit all the parts I don't like from my viewing if I want, but it leaves me sometimes with a disappointing taste in my mouth.

For example... Did we need to see Gregor crush Prince Oberyn’s head, watching his eyeballs get pushed in until his skull tore apart? NO. I think simply the aftermath or a sound effect would have been just as effective. Alfred Hitchcock was a master because he knew the art of subtlety. Often seeing mere pieces of an image is enough to leave a haunting impression forever.

Why do we feel like we need a deluge of sex, nudity, and shocking imagery to keep people interested, as if you were trying to pitch this to a 13-year old boy? As a society we really take pride in leaving nothing to the imagination like it's an expression of freedom, yet here we are exhausted and numbed because we’ve seen it all.

On that note, I also know that there are some scenes, characters, and circumstances in the show that are different from the books that really did not need to be changed. I can understand their need to change a few things because things on screen do not flow or make sense in the same way they do in prose. I am huge advocate for NOT being a purist because of those reasons, however when you do stupid things that don’t have a purpose, that’s where I draw the line. Sometimes it changes the entire makeup of a character or situation, and that is unacceptable.

Okay, thus ends my segment on what I don’t love. Now, onto the good stuff!

I adore the story and world of Game of Thrones, more formally known as the series A Song of Ice and Fire. As a lover of all things Tolkien, I am instantly attracted to the complex worlds, cultures, languages, and characters. George R.R. Martin is a pronounced Tolkien fan and said one of his inspirations for ASOIAF was my favorite story of all time, The Lord of the Rings. Here's what Martin had to say here in his Rolling Stone interview earlier this year:

“As I read Return of the King, I didn't want it to be over. That last book blew my mind, particularly the scouring of the Shire. I didn't like that when I was in high school. The story's over, and they destroyed the ring — but he didn't write "and now they lived happily ever after." Instead, they went home and home was all fucked up. The evil guys had burned down some of the woods; a fascist-like tyranny had taken over. That seemed anticlimactic to me. Frodo didn't live happily ever after or marry a nice girl hobbit. He was permanently wounded; he was damaged. As a 13 year old, I couldn't grasp that. Now, every time I re-read The Lord of the Rings — which I do, every few years — I appreciate the brilliance of the scouring of the Shire. That's part of what lifts the book from all its imitators. There was a real cost to Tolkien's world. There's a tremendous sadness at the end of Lord of the Rings, and it has a power. I think that's partly why people are still reading and re-reading these books.”

In other interviews Martin mentions that The Scouring of the Shire was one of the biggest inspirations for the series. This notion that life isn’t a fairy tale, but that heroes and goodness are always among us. Like Martin, The Return of the King was the book that blew my mind too first reading Tolkien. Martin’s series is incredibly harsh, but I think that’s what makes the heroes stand out more. The light of the hopeful characters, though they are few, is like a lamp held up in a window.

Though I can definitely see Martin’s love for Tolkien in his story, it isn’t quite as high-fantasy or magical as most in the same genre. The magic and mystery are definitely there but the brutality of the story makes it more historical in essence. Personally, it reminds me very much of the Old Testament, particularly the book of Judges which is full of carnality and the wickedness of man as it marks one of the darkest times in Israel’s history. Just like Westeros, during the time of the Judges there was no king and it was a select few trying their best to hold the land together at a time when people treated life as a free-for-all. The time of the Judges spans throughout the OT and includes memorable characters like Samson, Delilah, Gideon, and one of the most interesting females in the Bible, Deborah. The time of the Judges was also a time where men were fighting over gods and idols very much like in Martin’s world, and the honorable men (like Ned Stark) were ignored or killed off. 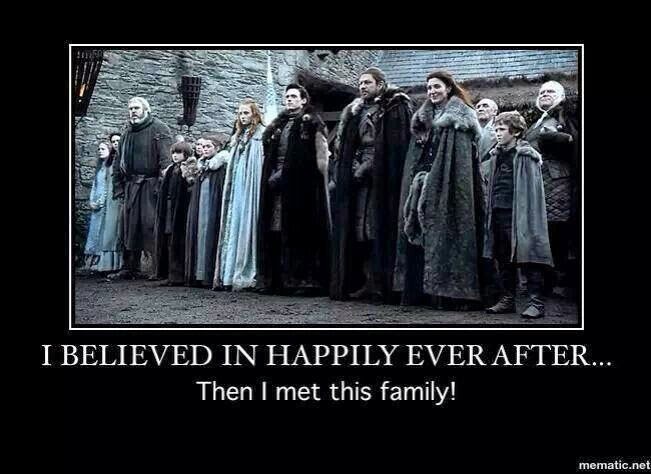 Though Martin's tale is indeed dark and full of terrors, there is also a bond that entraps both reader and viewer and that is the Stark family. The children of two of the last honorable people in Westeros begin together and then are separated over distance and time. The bond and love that unites them is the driving force of the story. I love what Martin said in the Rolling Stone interview about Ned Stark's death and why it had to happen:

"I knew right from the beginning that Ned wasn't going to survive. For one thing, many of the stars are his children, and you'd have to remove daddy for them to come into their own. That was part of it: I wanted to remove the certainty. There are moments in motion pictures or in books where the death of a character has enormous impact, not only because you miss the character and you identified with the character, but also because the remaining characters are now in serious trouble."

I cannot wait to start reading the books and even moreso to find out what Martin is going to do in his last two books.

Technically, the show is proficient in ways so many others only dream of.  It has an intense cinematic look and feel and it's probably a good thing that there are only 10 episodes a season because if there were more HBO would go bankrupt. And on that note, I love that the seasons are only 10 episodes making this deeply involved and complex world easy to digest for non-bookreaders. Though I haven’t read the books, I feel like I have in many ways just by how gloriously exquisite and detailed the show is with everything from the costumes to the food to the landscapes. I feel like I’ve been to Westeros even though I haven’t left my couch, (or really my computer desk). Additionally, the score of each season is breathtaking. And that opening theme? You know you’ve made a masterpiece when people actually look forward to the opening credits. It’s a knockout! 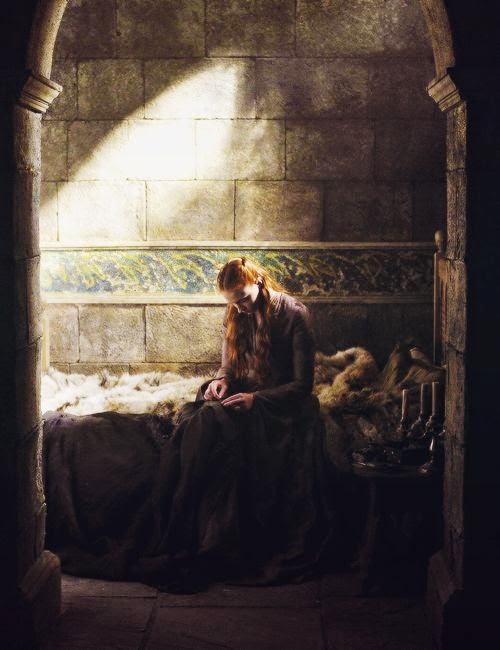 But my favorite part of the show has got to be the cast. I can’t say enough about them. They are so unique, ranging in a wide variety of ages, races, and appearance. Their casting director deserves an Emmy just for that. This wasn’t a happenstance cast but one chosen very purposefully and specifically to suit their characters. I don’t feel that any of them are acting while watching the show, but rather that I am indeed watching events unfolding in real time. I see a lot of funny memes and articles about how weird it is to see GOT actors in real life, and that’s mostly because they are so good at being their characters you forget even the idea that they could possibly be anyone else.

I would not recommend Game of Thrones to everyone, particularly to those who are sensitive to graphic material. It's quite brutal. However, as a story I couldn't recommend it enough. I've never felt so emotionally torn, intrigued, disgusted, entranced, and even afraid all at once. No one really knows what "Martin the Mastermind" is up to or what is in store, but I hope that he will at least give a few of his wonderful characters a fate that ends in redemptive hope. Even so, valar morghulis!

And if you want to watch the coolest opening sequence ever, here you  go! What is really neat is that every season they show (or don't show) new places on the map based on what's happening where in the story. Also next to each actor's name is their house sigil (symbol) of the character they play. It's the little details that matter. Love it!